I knew the day was coming soon, when my son would decide that he wanted to make his computer do something new, something a computer had never done before. I thought that like me when I was a little more than his age, he’d sit down in front of his computer and type his first “hello world” in some child-friendly language.

Unfortunately for that plan, Joseph seems interested in very little besides writing his own Civilization clone from scratch.

Faced with this daunting prospect, and knowing that it would be me writing most of this, I abandoned the idea of teaching him, line by line in something like Python or even Scratch. I had to default to the path of least resistance, which for me is Java and Swing. With all its verbosity and hassle, it’s not an ideal first programming language for kids, but it’s what we’ve ended up with for this project.

So far, after an hour or so of work — me in NetBeans and him in MS Paint — we have this. It’s not so much a game as a psychedelic grid, but it’s something that can be flashed up on the screen to demonstrate that we are making progress. 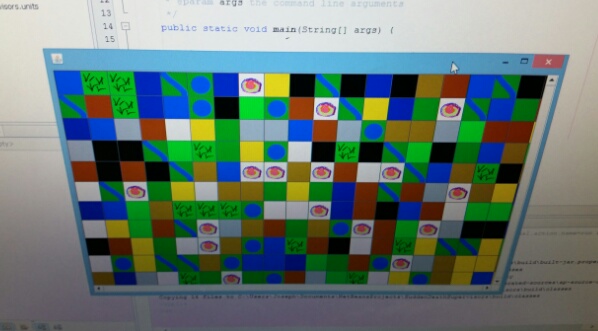 It’s called “Sudden Death Supervisors”, because apparently all six-year-old boys attend the “Axe Cop” school of naming things, and you can follow our progress here on Github.