My son is at the age where every question starts with “why” and everything, no matter how obvious, is to be questioned.  I regularly get asked about various iconography and bits of user interface that seem intuitive to me, but to someone without many years of experience are clearly not.  Through his eyes, I am beginning to understand the issues faced by new users of computers, mobile phones, and so on.

When playing with Google Maps, for example, he clicked on one of the stars I’d used to mark places we often go.  Up popped the bubble with the place’s name: 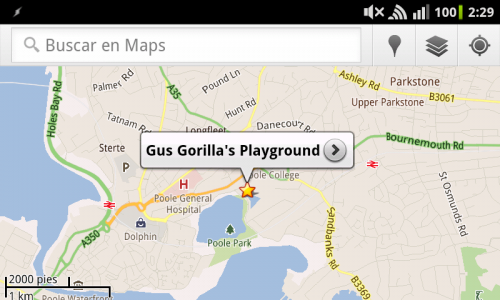 “What’s that arrow for?”

To me, the little right-pointing arrow on that Google Maps bubble is a clear indication of “more information is available if you click this”.  But to Joseph it clearly wasn’t – and why should it be?  Why does an arrow suggest more information?  It’s being used to point somewhere (conceptually off-screen) that you might want to go, like a signpost, but it doesn’t itself imply that you will find information that way.  And why pointing right? Because we live in a culture that writes left-to-right, and we expect things to go from more general to more specific in that direction.  Is a right-pointing arrow as intuitive to an Arabic or Chinese speaker?

An offline example came a few hours later at my parents’ house.  They have a new oven, which like most others has a “mode” dial and a “temperature” dial.  Both had icons above them.  The temperature dial had a thermometer, which was immediately intuitive to Joseph – presumably through previously having seen pictures of thermometers, as in this day and age the temperature is measured by apps and websites, not a thermometer.

But the icon for the mode dial (which I’m afraid I didn’t photograph) looked a bit like a square around everyone’s favourite “loading” animated GIF:

“What does that mean?” Joseph asked.

I couldn’t give an answer to that.  It was there because the other dial had an icon, and aesthetically they had to put something on this one.  But it didn’t imply “mode” – the other symbols around the dial did that.  ”This one’s a light, this one looks a bit like grill flames, this one’s got a fan; okay, that sets the mode.”

This is another thing I’ve seen in many user interfaces – and probably a few of my own. To the designers it might have looked pretty; a focus group might have sat around and said “okay, I guess we can see how that means mode”.  But it’s basically clutter – a UI element that means nothing and does nothing.

In conclusion, when trying to design a truly intuitive interface, ensure that it is tested by people who aren’t experienced at using similar products.  Ideally, it would appear, give it to a three-year-old and see what questions they ask.