At the end of day 20 of the build diary, we had a fully working tank that could be remotely controlled over a web interface that also featured streaming video from the on-board webcam. Phase 1 of the Raspberry Tank development was finally complete!

So naturally, of course, it’s time for phase 2: making the tank fully autonomous. This will require a few additions to the build.

The tank currently has no idea what direction it is facing. This isn’t a problem for a remotely controlled vehicle, as we assume the operator can work this out from the video they see. However, it would be helpful for an autonomous tank to be able to figure this out.

We also currently have no way of telling which way the turret is facing compared to the tank. The operator can’t even get a visual cue here as the hull of the tank is not visible in the video stream. They can drive the tank forwards and watch the video to get some idea of which way the turret is pointing, though this is fairly disorienting. So, the autonomous tank should probably detect where its turret is pointing, too.

My first attempt at doing this will be to add two three-axis magnetometers to the tank – one on the hull and one on the turret, as shown (sans wiring) below. 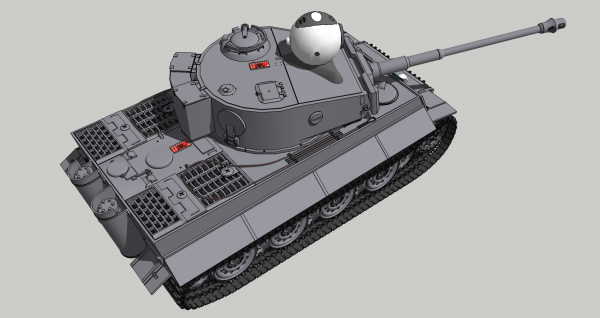 It would also be a good idea to prevent the tank crashing into things. For this reason, I will also mount an ultrasound rangefinder to the front of the tank, as shown below. 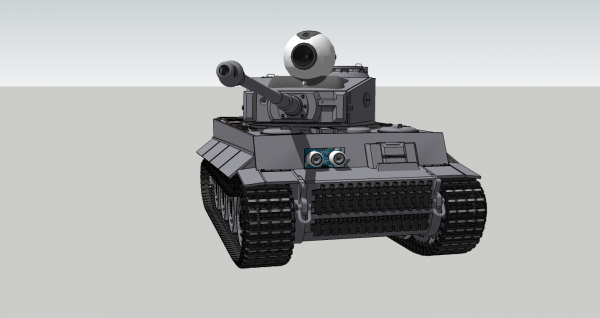 This will act as an override on whatever other activity the tank is conducting, to prevent damage to the vehicle. It would be nice to fit a similar device to the rear, although until now I have left the rear of the tank completely open to allow access to the Raspberry Pi’s USB and Ethernet sockets.

The new hardware could use a variety of methods of communicating with the Raspberry Pi, but perhaps the simplest and easiest is I2C. This would allow me to chain the new hardware together, and hang it all off just four pins of the Pi’s GPIO header.

Unfortunately, there is a disadvantage – the Raspbian operating system that I use does not include an I2C kernel module. Luckily I shouldn’t have to compile one myself, as the folks at AdaFruit have already done the job, baking their modules into another RasPi-targeted operating system called Occidentalis. While this does mean another re-flash of the SD card and another re-install of all the tank-related software, I’ve got that process pretty streamlined now.

I am hoping to avoid some of the low-level coding of the autonomy system by basing it around the open source ROS (Robot Operating System) framework. The wiki already has a guide to building and running ROS on the Raspberry Pi, though the author of the page does note that some of ROS’s high-level functions may be too much for the Pi’s CPU to handle. If ROS proves to be too bloated for the Pi, I will simply drop back to implementing the functionality in C without the middleware.

That wiki page also notes that there is currently no ROS node capable of interfacing with the Pi’s GPIO pins, so whether I use ROS or not, I will still have to write some GPIO / I2C code myself.

ROS also provides easy integration with OpenCV, the popular machine vision software. Implementing proper machine vision in the tank would be wonderful, as I’d love to have it able to follow a target (or even a person) around, though this may well be beyond the Pi’s processing capability.

What Shall We Do With an Autonomous Tank?

At the moment, I’m really not sure.