Just over seven years ago, after one potential student house deal fell through, I asked around the Games Society to see if anyone was in a similar situation. I met one girl who was strange and hyperactive and who was looking for other people to share a house with. She introduced me to a house and another potential housemate, and that housemate proceeded to introduce me to a nightclub, an entire musical genre, and another girl whom I immediately developed a crush on. Little did I know then that the house would come to define my time at university, and the people whom I turned to in desperation to find a house would become some of my best friends.

A couple of months later, the strange hyperactive girl asked me out. I, being shy, easily breakable and largely terrified of the opposite sex, said no. Via the medium of a cryptic LiveJournal post.

She drifted out of my life for a year and a half, moving away from my university city while I applied myself to my studies and my increasingly inappropriate crushes on other people. But then, that year and a half later, she was back in Southampton for one weekend which began with following fairy paths, continued with whisky and bitter tears, and ended up with that strange, hyperactive girl asking me out for a second time. This time, I seem to recall, I said “yes”.

University finished for me in the summer of 2006, splitting us further apart. But in November of that year, we moved to Bournemouth together.

Yet more years have passed. We have come a long way from being a strange, hyperactive girl and a terrified boy who refused her advances. This Friday, the tenth of June in the year 2011, in the presence of those friends from long ago and many more besides, we were married. 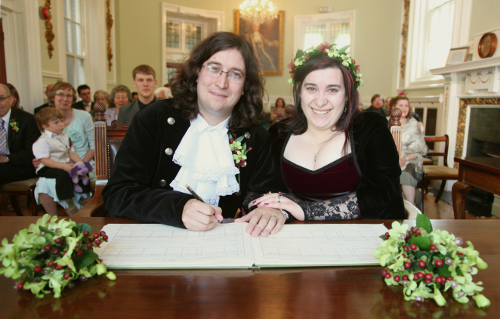