“Google+”, Google’s new stab at social networking, is doing the rounds of tech news sites today. So what’s it like – if you scored an invite, should you be using it, and if you haven’t yet, are you missing out?

If you’ve used Facebook – and let’s face it, you have – Google+’s interface will be immediately intuitive. A long feed of statuses and shared links, the ability to comment, re-share and “+1” (i.e. like). It does photos and videos, integrating with Picasa. It does check-ins, integrating with Latitude. It does text and video chat, integrating with Google Talk. You’re probably not surprised by any of this.

It’s most un-Facebook-like feature is its “Circles” – groups of people that you can share with easily. This is possible with Facebook groups, but there it’s the exception rather than the rule. Google clearly intends for your Circles to define the way you share, chat, and use Google+.

If this is sounding a lot like Diaspora to you, well… it is. Aside from the distributed nature of Diaspora, it’s virtually identical – including the slow invite procedure that causes it to be a virtual ghost town at the moment. Only time will tell if it suffers from the same problem, the root cause of which being that it is not the world’s first social network.

It has some great ideas, and if nobody were members of Twitter or Facebook already, it would be easy to say “yeah, this is great, let’s all use this”. But Google+ requires effort – time taken to invite friends, curate your groups, set up sharing preferences. It’s a reasonable amount of effort to invest for people that aren’t sure if their friends are going to use it too.

But the biggest, most important issue is that it doesn’t, at present, integrate. With anything. Now it is still under heavy development; I’m sure integrating with other services will come soon. But right now, it doesn’t talk to Twitter. It doesn’t talk to Facebook. It doesn’t have a public API to talk to third-party apps. I, and many other users, are so heavily invested in Twitter and Facebook that the transition to Google+ has to be seamless – it has to work alongside the other networks, without any extra effort, otherwise it’s just not worth the bother.

To make the point, this is how the networks and apps that I currently use interact: (yes, I was that bored) 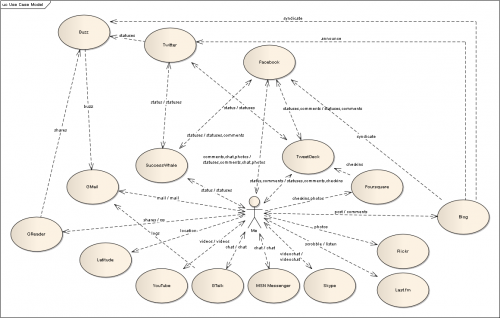 I don’t mean to be negative to Google+ – it’s a good service which I’m sure, given time, will become great. One day it may be the new Facebook, a social networking behemoth that all others aim for and compare themselves to. And it actually cares somewhat about privacy (for now), which would in my opinion make it a preferable king of the social networks. Its UI is great; combining Google’s characteristic minimalism with some actual great design rather than just utilitarian blocks of colour. 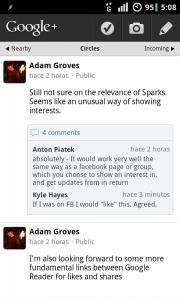 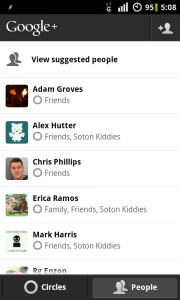 But for $deity’s sake, Google, give this thing a public API. As Twitter realised five years ago, the API is as important as – if not more important than – the service itself. Let us mix it up in weird and wonderful ways with the services we’re already using, and Google+ will instantly lose most of its barrier to entry.