It should have been obvious when TweetDeck was acquired by Twitter back in 2011 that it wasn’t long for this world. Even more so when the only significant update in the intervening period was to remove a feature (handling tweets over 140 characters).

Although Twitter started out by enthusiastically embracing 3rd-party app developers, its quest to find a way to monetise its service has led the company to grab more and more control over how its users interact with the platform. Users who use Twitter’s website and mobile apps can be served ads, or “promoted tweets”, much more easily than those using 3rd-party clients. The transition was an obvious one, but not a pleasant one – many developers turned on Twitter, accusing it of being actively hostile to developers.

I would be hard pushed to disagree. Westminster Hubble relied on Twitter’s RSS feeds to let people follow their MPs more easily – a feature broken by Twitter’s API changes. SuccessWhale survives, but hardly with Twitter’s blessing – if it were to ever have 100,000 users, it would be banned. 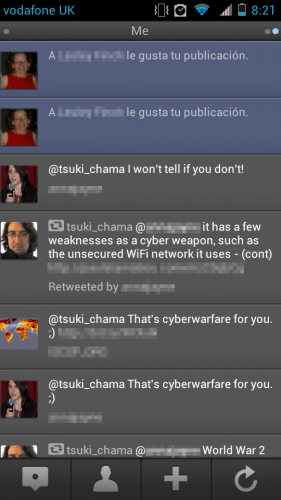 And today we lose the TweetDeck app on desktop and mobile platforms.

I am an avid user of TweetDeck for Android (actually, its fork “TweakDeck”, though they are very similar). This is for the simple reason that it is the only Android app that can combine “mentions” from multiple Twitter accounts and “notifications” from a Facebook account in a single column view. Surely this is a feature that plenty of people would like in an app. But check out the competition. This is a list of all the Android apps that are both Twitter and Facebook clients:

The functionality that Twitter is removing by retiring TweetDeck is simply not found anywhere else in the Android ecosystem. Until some other application steps in to fill the gap, a function that I and many other users love is simply and infuriatingly impossible to achieve on Android.

Just like with Facebook, it is the network effect that keeps me – and countless other developers – using Twitter despite its increasingly developer-hostile control over the ways in which we interact with it.

One day, perhaps the “next big thing” in social networking will be a platform that starts open and stays open.