Here’s some initial design ideas for a location-aware chat app that, as far as I am aware, has significant new features over and above existing mobile chat apps (iMessage, WhatsApp, BBM etc.) and existing location-based functionality in apps (FourSquare, Facebook check-ins, Google Places). 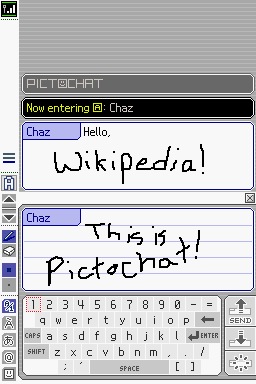 The inspiration for this idea came, more or less, from the Nintendo DS “Pictochat”application.  PictoChat allows up to 16 users to link their DS consoles over a peer-to-peer WiFi connection, and share doodled messages with each other in real time. Between a couple of DS-using friends, PictoChat is an interesting gimmick, but I first encountered it coming into its own at an anime (Japanese animation) convention called MinamiCon. Here, the concentration of DS users was so high that multiple 16-person PictoChat rooms came into existence, full of people chatting away with other convention-goers.

There is one big change to the PictoChat concept that we need to make to have a viable idea – and one big addition.

There are a number of technical issues that the app would have to address. 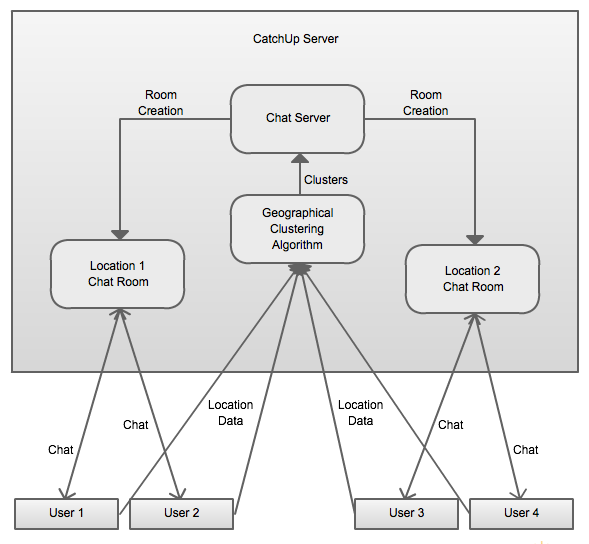 I have produced a couple of user interface mockups for the potential design: 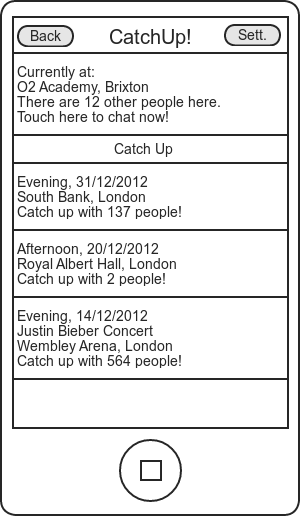 The main menu of CatchUp presents a simple list of chat opportunities, in reverse chronological order.

At the top is the “Chat now” area. Pressing there takes you to the live chat for your location, as determined and managed by the CatchUp server. The tile shows where CatchUp thinks you are, and how many people you will be placed in a chat room with.

Below this is a list of all your “catch up” opportunities. If configured to do so, CatchUp monitors your location in the background. If you stay in a location with enough people for long enough (possibly without having to explicitly open a chat), a “catch up” for that event will be placed in the list. The user can press one of these to be taken to a chat room for everyone who was there. Users can remove the Catch Up from the app (and thus prevent being chatted with by other event attendees) with a swipe.

Settings will have fine-grained privacy options, for example to prevent the user appearing in others’ Catch Ups without explicit permission, to mark certain locations that Catch Up will automatically deactivate itself in, and so on. 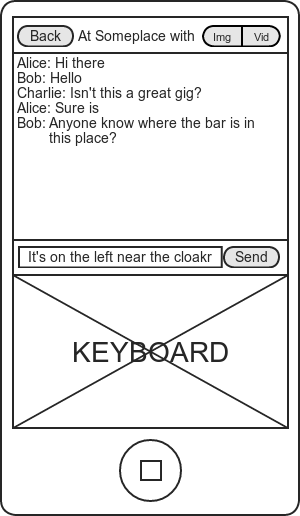 Chatting in CatchUp is a simple affair. As locations may have many people chatting, iPhone-style bubbles are replaced with a more basic appearance – though images and videos can still be embedded.

No application is without its flaws. Here are some that CatchUp would have to address:

Aside from “CatchUp”, a number of other names have been suggested:

What’s next for CatchUp is largely down to you.

I am a UX guy and a Java/Python/PHP developer with zero experience of mobile app development – I can do a mean usability study, but I can’t make this app myself in a sensible amount of time.

If you want to help make this app, get in touch. I can’t do it without help.

If you want this app to exist but can’t help, share this post! Eventually it’ll get to someone with the time, skill and inclination to help out.

And if you have any comments whatsoever, keep on scrolling. I’d love to hear any thoughts or (constructive) criticisms you may have!

Interesting idea, although it could be tricky to generate the events - users would have to allow location data/etc for it to be effective. Would offer a hand but my app development is sadly limited to (very dodgy) Objective-C, and glancing-at-the-Android-tutorials-then-giving-up-due-to-the-emulator...

Yep - the app could allow an "enter your location" box if the user doesn't choose to enable location, but the idea was centred around having location available.

That said, how about introducing "not there" chat members as second-class citizens in chat? That way, anyone could see what was being talked about in real time at a certain event, but users that are actually there can optionally restrict their view of the chat to only include people who are also there.

Really nice idea! You could have events also generated by the users.
Say someone turned up to a gig and they open the app. They're greeted by a local area map showing the locations of nearby chats that they're close enough to join (say a 0.5 mile radius?). If they don't see an applicable chat, they can begin a new one. Others then turn up later and join the already created one. Really cool!

Something totally aside. How do you stop someone from taking this wonderful idea and with much greater resources just developing it behind your back? The reason I ask is I had an idea for an app myself (albeit hardly as innovative as this!), and I want to pitch it to the company in question (a local high street chain) without them just saying, "no thank you", then making it behind my back without my input.

That's a pretty good idea -- weirdnesses in the geographical clustering algorithm, bad address-to-location mapping for events or high error on user location could all cause users to be placed outside the main chat room for an event, so a map and the ability to name events yourself on the fly would be very useful there.

As for how to prevent that, in this specific case I don't -- I'd like the app to exist, but if some other group nicks the idea and builds it themselves I don't really care.

In the general case, most businesses produce and sign Non-Disclosure Agreements (NDAs) to cover that eventuality. The company with the idea would produce an NDA and get the other company to sign it before they discuss the idea in any detail. I'm not sure whether this would come across as too cocky if you're an individual trying to get a high street chain to sign up. There's a StackExchange site called <a 0="" href="http://answers.onstartups.com/" rel="nofollow noopener">http://answers.onstartups.com/</a>" rel="nofollow">OnStartups</a>, your question may have been answered there (it's roughly on-topic) or if not, it can't hurt to ask. If you do go ahead with an NDA, it's almost certainly worth getting a solicitor to draft it with you to ensure it's legally binding.

I'd be up for assisting. What about Chattr?

I'm gonna have a go at some ideas, but these are only to help you. :-)