Earlier this evening, @HolyHaddock linked to an entry on Brian Hurt’s blog entitled “Why I Quit Twitter”. In it, he argues for his leaving Twitter on the grounds that it is not a good place for debate and extended discussion:

If you want to debate me, I’m open to it. But for the debate to not be pointless, that means it has to be held somewhere where ideas can be explored and complex arguments can be presented. In email, in blog posts, in comments, somewhere where there is room. 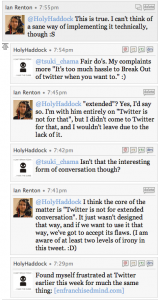 Which is fair enough. I would argue that Twitter has every right to be bad at conversation – that’s not what it was created for. Once upon a time, it asked a simple question: “What are you doing?”. The user base has shaped Twitter over the years, most notably in the formalisation of @usernames and #tags which began simply as trends among users. But it has stuck resolutely to its 140-character limit, without which I think the service would change for the poorer.

I have no real argument with Brian Hurt here – his reason for leaving is a fine one, and he’s certainly not suggesting anyone else should necessarily leave for that reason. Personally, I didn’t come to Twitter for extended conversation, and I won’t be leaving for the lack of it.

But ironically @HolyHaddock and I did discuss this problem on Twitter, and it was probably not long before the conversation became annoying to those that follow us both. (To double up the irony, I was also using a pastebin to reply in more than 140 characters.)

I think the real issue here is that although Twitter does not well support conversations, people tweet things that are likely to start conversations, and there is no real way to break out of Twitter once the conversation has started. If we assume that Twitter has no intention of allowing long – even infinite-length – replies, then if there is to be any way to ‘break out’, it must be through another service.

Now the friendliness of the Twitter API makes it very easy for other sites to integrate with Twitter, allow users to sign in with their Twitter credentials, and pull tweets across for display. But as I see it, there are a few issues that would need to be resolved with a potential service:

Tagging onto the Google Wave point, is there a service like this that already exists, in Wave or otherwise? Any thoughts, oh great interweb hive-mind?