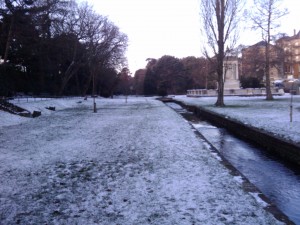 Icy roads delayed my lift leaving the house for an hour and a half this morning, whereupon he discovered that the ice had also broken his driver’s door lock, making driving impossible for today.

At half past nine, I was finally on my way to work. Alone, trudging through snow and skidding across ice, getting there slowly. It was me - and Guns ‘n’ Roses - against the Winter, against the public transport system, against the world. I would be three hours late, but I’d get there. Or so I thought. 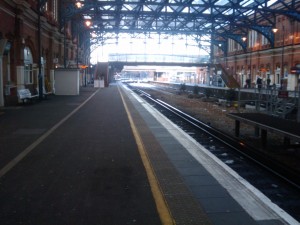 As it turns out, said public transport system failed me in the end. My bus made it to the station on time, but trains were nowhere to be seen. In fact, this morning is the first time I’ve heard the station announcements declare a train to be more than an hour and a half late.

Faced with the prospect of not reaching work until 12:30, I aborted my journey and walked home again in the snow.

As always, I find it amusing that Britain just shuts down whenever the temperature dips below zero. Surely if Canada and Norway can manage to have functioning rail networks, catching a train in the British Winter can’t be too much to ask? But apparently, it is.

I feel your pain! All 3 trains I attempted to catch failed on me this morning, I accepted defeated graciously as I'm now safe and warm working from home for the rest of the week, ain't too bad!