One of the games I remember liking from what I was shocked to discover was 11 years ago was Warzone 2100. It’s actually one of the rare examples of an Abandonware game that’s been taken and updated on by a loyal community – over a decade since it was first released, they’re working on version 3.0. (You can download it from here, completely free.)

The reason I’m mentioning it today is for its vehicle construction mechanic. Rather than simply building a Light Tank or a Heavy Tank and so on, each vehicle came in a number of bits – body, tracks, turret, and so on. You researched each item individually, then you could build vehicles with whatever bits you’d researched.

For some reason this idea has been weighing heavily on my brain over the last few days, so I’ve sketched out some ideas for a game that I’m half tempted to write.

It would be sort of like a naval version of Warzone, only 2D with a limited playing field, and probably rather simplistic graphics (especially if I’m building it on my own, since I can’t draw for toffee). There aren’t any buildings apart from a single base for each player which builds your ships, and you lose if your base is destroyed. In order to defend it, you build ships from blueprints you have researched.

Each ship is composed of four bits:

Ships can shoot at other ships (submarines are a possibility too) and if they get close enough, the enemy base.  They can be moved around the playing field, and will automatically fire on any enemy ship within range.

Here’s the rest of my thought processes (and doodles) in Awful Handwriting form: 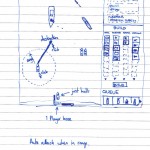 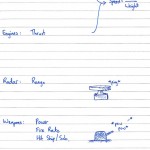 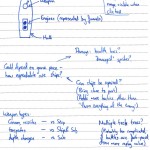 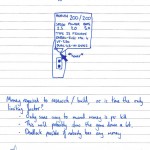 My big question is, if I were to make this – and have the patience to finish making it, which is a rare thing indeed – for what platform should I be making it?

Does anyone out there in internetland have any thoughts on which format they’d like to see a game like this in?  (And while you’re there, do please wade in with any other suggestions, rants, reasons why the whole idea is flawed, etc…)!

« Previous Post
Cold War II: Once More with Botnets
Next Post »
For the Discerning Lady or Gentleman, SuccessWhale version 1.1

Looks a neat little idea. Myself I'd prefer a nice simple PC client, because I'm a right luddite when it comes to phones.

Also, check out "Gratuitous Space Battles" if you get a chance - has quite a lot of that style of unit design in it, might give you some ideas.

Aww man, that looks awesome. One of these days I'm going to have to start using Windows :(

or port it to Linux.

To answer your question tough, if you want anyone to play it you basically have to make it a web page. I think you can do most things with JS these days, and then farm the rest off to a backend server.

Though I am assuming this; I have no JS skills (yet).

@aefaradien Developing for the desktop implies Linux for me, since it's my primary OS when Joseph isn't around. A desktop version would support at least three platforms.

JS for me has always felt kind of woolly, a sort of "you can do this, but it's going to look really hacky" experience. I'm sure it's possible, but as to whether I would go mad trying... :)

Fair enough, Java it is then?

And after looking at your UI sketches, I am of course going to suggest using Eclipse UI (RCP) for the main layout. Dragable tabs are always awesome. :)