From John Wyndham to Alan Moore, the British have long had a morbid fascination with the downfall of society; the government as the enemy; that dark time after the “stiff upper lip” fails us. Though that upper lip remains stiff in the form of #riotcleanup and Operation Cup of Tea, tonight, London burns. 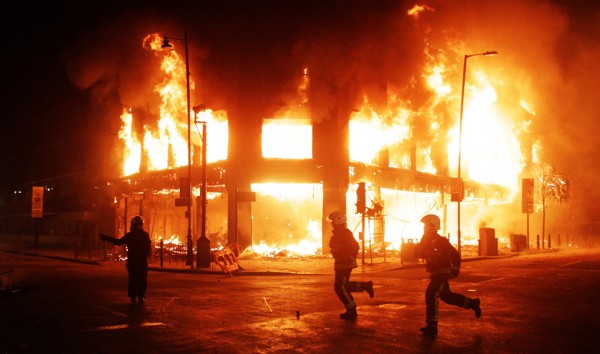 As @RichIshi pointed out, the riots in London and other cities have polarised opinions in abrupt and sometimes unexpected ways. A perhaps surprising number of people have taken the rather right-wing “fuck the pikey scum” attitude, culminating in a poll for the Sun suggesting that 33% of readers would support the use of live ammunition against the rioters. Some others have expressed sympathy for the rioters’ cause, making the more “lefty” suggestion that the riots are the culmination of long-running social problems that need to be addressed. 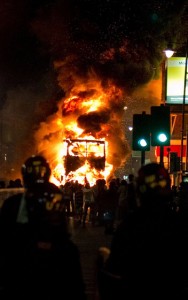 Perhaps the only “correct” stance to take is that of the millions of Londoners who are just hoping like hell that someone doesn’t burn down their house.

These are my “first” riots; the first to leave a mark on my memory. I was four during the Poll Tax riots, not old enough to remember, and the Toxteth riots were another four years before I was born. I am prime rioting material: a twenty-six year old male. But if anything led me onto the streets (and thankfully, my town has been quiet) it would be to protect my home, not set fire to someone else’s and nick a few iPads.

Why? Because I am white and middle-class.

I have a career. I have a flat. I don’t have a lot of money, but I have enough. I live amongst people who are, mostly, homeowners. Society has given me a lot; it has given me a way of life that I would want to protect.

But many are not so lucky. Being poor and from a deprived area; being young and having few prospects in life – that doesn’t excuse rioting, or looting, or arson, but it’s surely not hard to see why it happens. When society has given you nothing, and promises so little for the future, what choice do you have but to either sadly contemplate your lot, or reach out and take what society will not willingly give you?

I’m not condoning the rioters – their actions, particularly burning down private homes and small businesses, are reprehensible and they should be punished for them to the fullest extent of the law. What I am saying is that if we cheer on the police putting down the “chav scum”, if we call for rubber bullets and tear gas, if we fear the hoodie and all who wear it, we are ignoring a problem that exists in our society. Instead of ignorance and fear, it is our responsibility as members of that society to show courage and pride, and in so doing, help fix the problem.

These people are doing stupid things, and destroying communities that they could come to love. But they are not irredeemably stupid; they are not an enemy to be crushed. Their motivations are a problem to be solved.