Winfrith’s “Starlight” children’s nursery has always struggled to stay open despite a lack of demand for its services.  After one of many closures, it opened again late last year – only to close again in February after one of its staff was arrested (though never charged).  Now it is abandoned again, closed for the forseeable future, its licence revoked.

Since the police investigation, I’ve not seen anyone there – not even someone simply returning to clear up. 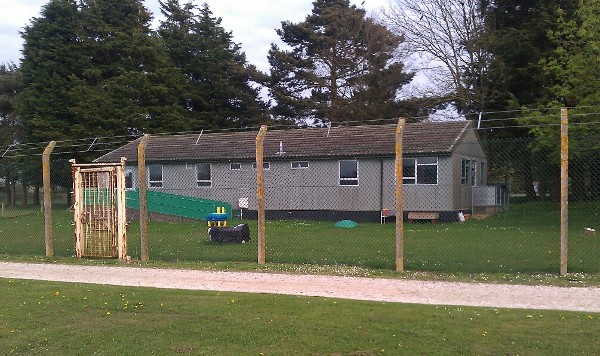 Never the prettiest of places, the former nursery is a squat grey portacabin locked away behind razor-wire and rusting iron gates.  But its abandonment lends it an almost sinister edge.  Children’s toys litter the ground outside, left there at the end of a day, not knowing that they might never be moved again.

In one corner of its surroundings, fading police tape cordons off an area between trees. Three bright plastic spades hang from the tape, yearning to be used by children that will never come.

It belongs to the crows, now, who sit atop the roof and the fences and caw loudly at passers-by.  They understand, I think, that it is not a place for humans anymore.