Somehow, against all odds, a party we threw in June of 2005 to celebrate the graduation of Racheet and Andy turned into a regular yearly event. This, for spaffy self-indulgent reasons, is its history. 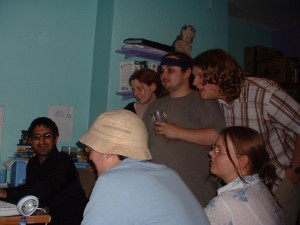 RABIES, a horrible backronym of “Racheet and Andy’s Big Incredible Extravaganza of Summertime”, came at what was the end of my second year at University. Andy and I cooked what was to be a sit-down meal for 18 specially-invited guests, and would have been just that if we’d had enough chairs and tables to seat everybody. In practice most of us sat on the floor and served ourselves buffet-style from food on the two big tables we’d borrowed from the Games Society.

There was suspicious vegetarian stuffing, an experimental recipe all of our own. There was Christmas pudding (what better time than June?), there were swordfights in the garden under the blazing sun, and there was performance of the worst lemon fanfic we could find on the internet.

It marked the closing of a time in my life that was saturated with the company of so many friends – a time I knew would soon be gone, but RABIES was always about forgetting that for a day.

It was, with the possible exception of the day I proposed to my girlfriend, the happiest day of my life. 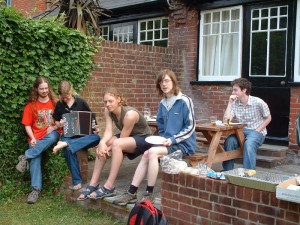 2006 was the graduation year for many of us, myself included. We spent days trying to figure out another suitably horrid backronym involving everyone’s initials, but in the end gave up and declared it “RABIES 2”. Racheet and Andy were both still in attendance, so it didn’t seem too much of a stretch!

Out of necessity we relocated to a different house and the sit-down meal became a barbecue, a change that was to define all future events. 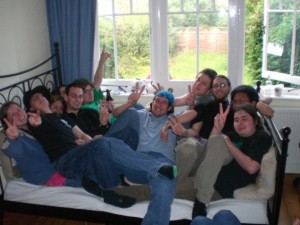 RABIES 3 was a turning point for me. Having graduated and moved away, I was coming back to Southampton just for the party. And having not spent a great deal of time in my old University town that year, RABIES had moved on a generation. It had become adopted by the Games Society as a society event, attended now by freshers that everyone else knew, but I had never met.

I had no imminent leaving to forget that year. But as a father-to-be with a brain full of all the stress that entails, I suppose it helped me forget about that for a day – pretend I was back at University again, with a child’s carefree existence away from what my life had become. 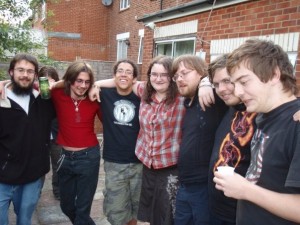 As the now increasingly inaccurate RABIES 4 approached, a thread appeared on the Games Society forum asking what on earth “RABIES” stood for. It dawned on me then: they don’t know who Racheet and Andy are. Three years had passed. Those graduating that year could have spent three whole years of University life in the time since we’d said goodbye to those two. 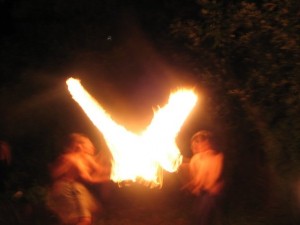 And when I arrived, people clustered around me, asking how I was, bemoaning how long it had been since we’d last met, asking how my job was, how my family was. I was old.

New traditions were born here – the location moved once more, though the barbecues remained. It was here that the dubious tradition of “Shirtless O’Clock” was born, and where our fondness for fire staves and poi blossomed into fire-swords, fire-chucks and the fire-naginata. Truly, it was a new generation of drunken recklessness! 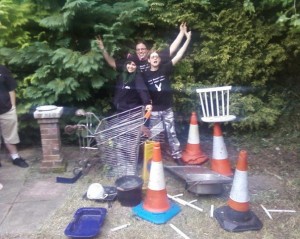 The fifth RABIES continued in a similar vein, with alcohol and barbecue and fire aplenty. We also ventured deep into the hedge behind what was by then known as the House of A (and E), no longer the preserve of Gemma and Tallulah and the Chemistry students of the once-glorious Extreme Breakfasting Society. Beyond that hedge we found all kinds of bizarre things. We emerged bearing them, but we emerged changed people. 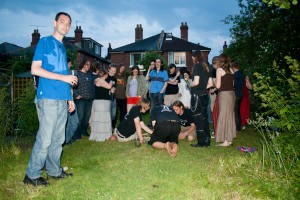 And now, RABIES 6 has been and gone. Five years have passed since Andy, Mark and I first sketched up a guest list of the friends we’d like to invite to a sit-down meal in honour of their graduation.

The attendance these days tops 40, and the hunt continues for ever larger back gardens in which to hold it. Nothing short of 20 pounds of mince and 40 sausages were bought for the barbecue, and outdoor tables groaned under the weight of drinks bottles piled high.

And oddly, things have come full circle, for Andy is graduating again this year, albeit in a city far from us.

I am the last of what we called the Soton Kiddies to still be in attendance at RABIES; the only person to have been to all six. I don’t organise, these days, and I am barely involved with the cooking.

And I wonder, at times like these, how long RABIES will continue.

Will I still be going when I’m 30, five years from now? Did we create a tradition that will last the test of time, still happening every year 10 or 20 years from now, when no-one remembers any of us, and RABIES has become an acronym for something else entirely?

I notice there is a general trend of increasing facial hair through these photos, with the exception of RABIES 5. Has this become a rule yet?

If aging brain serves me correctly I missed the first RABIES, attended 2 & 3, then haven't been to any since then as the older generation progresively moved on and the people I went to meet with were generally not there anymore. Does bring back memories though.