No idea why the hell I bought a Psion 3a a lottery ticket? Check out my previous blog post, “Coming of Age”. 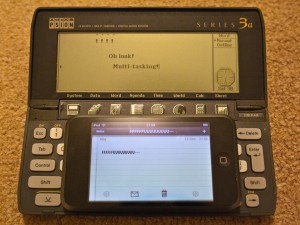 It wasn’t a good sign, I suppose, when I switched the old Psion on this evening and discovered naught but vertical black bands on the display. It took a good few power cycles, lid closes and a strenuous massage of its hinges before it finally spluttered back into 16-bit (Multi Tasking!) life. But it made it in the end, just in time to discover what fate had in store for it.

Now, there are a few ways of finding out what the night’s lottery numbers were. First, one can tune into the live draw on television. However, the TV guide indicated that the show was presented by Scott Mills, so that option was immediately discounted. No blog stunt is worth 10 minutes’ exposure to Scott Mills. The next method is going to the lottery website, but this was discounted just as quickly - I didn’t want to shock the poor old girl by showing her what BBSes had become.

Ah, but there is of course a third option more befitting of the Psion’s age. I speak, of course… of Teletext. Trust me, I am as shocked as you that this thing still exists. Hell, I was pretty surprised that my TV still had an analogue receiver. So, to page 555 on BBC CEEFAX we went, the Psion checked her numbers, and… Yeah, we didn’t win. A paltry single number, in fact, only a third of the way to the £10 lowest prize.

And that, I suppose, is the end of the road for the old Psion 3a. 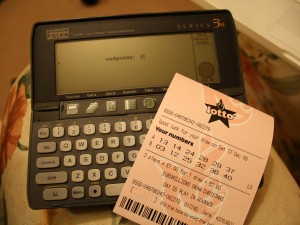 I remember virtually idolising these things when I was a kid - I’d been though innumerable personal organisers and proto-PDAs, but to have a Psion 3, with their high-resolution screens and the little touch-sensitive app buttons, the voice recorder, the programming environment… This thing was an object of desire as far as I was concerned. And it was certainly an improvement over its predecessor, the Psion 2, which I somehow also had despite it being nearly as old as I was.

Yet now the 3a headed for the great landfill in the sky, an anachronism in today’s world. It takes expansion cards that nobody sells, communicates with a PC through a cable that nobody has and software that no-one can run. My cellphone has a processor 70 times faster, with 200 times more RAM. In my pocket I carry 10,000 times more storage than this thing has. In a world soon to be rolling its way into the year 2010, it is less than useless.

And yet, despite that, I will be sorry to see it go.

The very best thing it had was tone calling. You put it to the phone and pressed the button and it dialled the number. Psion brought out Series 5, everyone wanted it (better keyboard etc), but the tone calling barely worked as it was a couple of hertz off (I could hear the fractional pitch difference and it didn't matter how close you held it to the phone, it would frequently dial wrong, not dial at all, etc). I contacted them and all I got was denial. A phone database that doesn't connect to anything is useless. They could have been up there with Nokia or even Apple, but this is a lesson to future management.. This is what happens when you get careless. It is also a sad indictment on globalisation -- only the best wins.