It doesn’t seem that long ago, perhaps only five or ten years, that you could buy or build your own computer and do whatever you liked with it. If you bought it, it would probably come with an operating system, but if you didn’t like it you could download another one and use that instead.

Nowadays… not so much.

My main computer is a Late 2007, 13-inch Macbook. You can install another operating system on it—so long as you keep the original OS to apply firmware updates. And you repartition the hard disk using Apple’s tools. And you install a custom boot loader. Oh, and even the custom boot loader can’t boot from USB.

My other computer is a Samsung Series 3 Chromebook. You can install another operating system on it—in a chroot, because you have to use Google’s kernel to get proper hardware support. You can try your luck with a proper dedicated install of another OS, but your hardware will be badly supported. Your choice of other OS is a two-year-old version of Ubuntu, or a current version of Arch Linux for which no-one knows how to build Firefox. It boots from USB when it feels like it. The rest of the time, it beeps and restarts with no error messages. 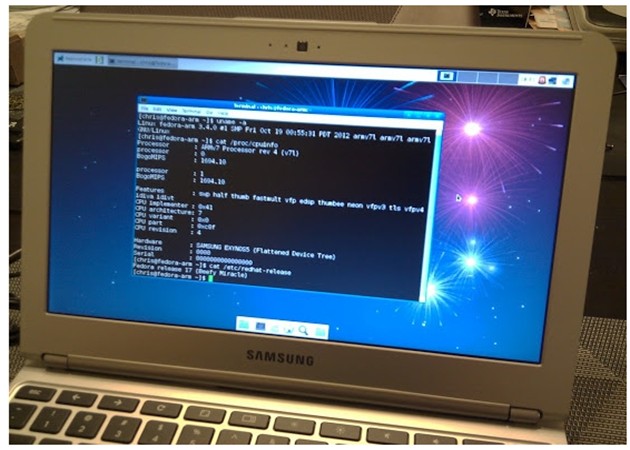 And these days our phones are computers too. The more capable they become, the more like a real computer, the more we resent their limitations.

I have a Droid Razr Maxx. You can install another operating system on it—so long as it’s pretty similar to the one it started with. And it’s compatible with the built-in kernel, which you can’t replace because it has to be signed. So you have to kexec your own kernel on top.

All I really want from a computer is a bunch of POSIX utilities, a tiling window manager, a copy of Firefox and a package manager, preferably APT-based. Ten years ago that didn’t seem too tall an order. But with the computers we have today, I can and have struggled for days to achieve that—before giving up.

Whatever happened to the generic PCs of years gone by? Computers were always supposed to get smaller and cheaper, but why did they also get less useful; less free?

Bootcamp was only introduced in 2006 wasn't it? A year later, there were bound to still be a few winkles.

Shame about the Chromebook though.

Out of curiosity, if that was your shopping list of requirements, why have you got those two bits of hardware and not a linux-friendlier laptop, or built a desktop?

Bootcamp does half the job, but rEFIt and very cautious partitioning are still required on the current generation of Macs if you want to use anything other than a sanctioned version of Windows. (I believe USB booting may be better-supported these days though.)

I've never really had the money to go out and buy a laptop to my spec. The MacBook I inherited from Eric, while the Chromebook was a cheap second-hand one that I bought to travel with then discovered I preferred it to the MacBook.

I did build a desktop that fit my requirements perfectly, but I can't use it without being antisocial so I gave it to Joseph!