One of the ways in which a number of my friends spend November is participating in National Novel Writing Month, or “NaNoWriMo”. This is its 15th year, in which some 300,000 amateur novelists signed up to write their hearts out over the course of 30 days.

It’s ten years since I first came across the idea, and in all ten of those years I have professed myself too busy to dedicate that much time to churning out my sub-standard fiction.

This year, though, I discovered a similar project I couldn’t help but have a go at—NaNoGenMo, National Novel Generation Month. The idea is simple—instead of spending November writing a novel, spend November writing a script that can write novels for you.

A lot of NaNoWriMo novels are fanfiction of highly variable quality, so in homage to that, my NaNoGenMo script uses exactly that as its source material: specifically, a user-selected category or search on FanFiction.net. It will scrape the stories it finds for sentences, store them all locally, then set to work mashing them together in various gramatically-reasonable ways until the 50,000-word goal has been reached. 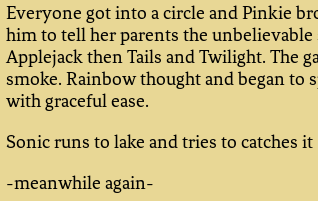 During the course of writing the script I tested it mostly with Doctor Who fanfiction, some of which is not particularly bad. But then I discovered that FanFiction.net has categories for cross-overs, where authors borrow characters from two of their favourite ‘universes’. These are generally, shall we say, less well written.

So, if you’d like a glimpse into a world where Bayesian poisoning spammers hawk not Viagra but My Little Pony / Sonic the Hedgehog fanfiction written by 12-year-olds, look no further than the example output that my NaNoGenMo script generates.

If you’re up for some more bizarre fiction written by haiku-spouting drunken Markov chains, check out the list of NaNoGenMo competitors, quite a few of whom seem to have taken my code to new and stranger heights!