The tiny nation of Kingswald is home to no more than ten thousand souls, scattered between numerous villages that hang, defying gravity, from cliff-tops and precipices.  It lies deep in the Northern Reaches – on most maps of the Realm, it is a tiny speck somewhere about the “H” of “Here be Dragons”.

Well, there are no dragons, but Kingswald is a place that thrives on stories of them and a thousand other mythologies.  The Winter nights are long and cold – the Summer ones not much better – and between sips of rancid tea the Elders set young hearts aflame with tales of adventures from days of yore.  Of course, when those young hearts grow up and discover that Kingswald offers no opportunities for adventure whatsoever, they decide to seek it elsewhere. Not to the North, for the forests and the mountains offer only frostbite and death, but to the South.  They take the Road (for there is only one), south down into the foothills and onward to the sprawling grasslands.  Whether they find their adventure, or just a place to settle down, is hard to say.  Kingswald is not a place many are keen to return to. 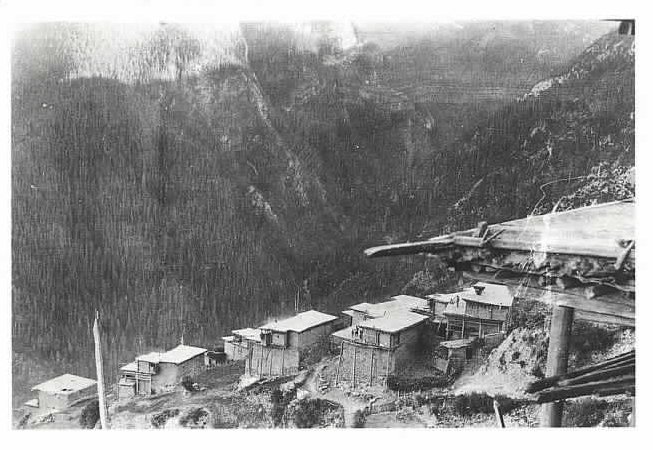 No, the only people who come to Kingswald are the traders.  Once, maybe twice a year, a wagon train arrives loaded with silks and spices and other exotic goods.  The people of this mountain kingdom have so little of worth that they can save up their entire lives for a few bolts of silken cloth. But what the traders really bring, what’s really valuable, is the news – the only reassurance that there is a world out there beyond the snow and the trees.

Six days ago, traders came through the villages of Kingswald.  They stopped in one of the largest, and camped for the night. You went to them, of course, wondering what stories they would tell of great empires and farms and oceans and other unimaginable things – but they had nothing to sell and nothing to tell, only grim faces and black armour and weapons held close at hand.  You asked who they were, and got told that it was none of your business.  You asked why they were there, and got only a vague reassurance that they weren’t there to invade, backed with slight confusion.  To tell the truth, they seemed a little surprised that people even lived this far up in the Northern Reaches.

The next morning, they were gone.  But they didn’t take the Road back to the rest of the world. They went North, wagons bouncing uneasily between the roots of the thickening forest.  The villagers called after them, shouted warnings, begged them to stop – but the soldiers, if that’s what they were, showed no signs of having heard.

Days passed.  The atmosphere was melancholy, and all the people of Kingswald who had heard the story assumed that the strange men must be dead by now, fallen victim to wolves and frostbite and their own stupidity.

But on the fifth night…

Darkness closed in around Kingswald at the end of another day. You were sat drinking tea and telling tall tales in the village’s Meeting House as always, when the door flung back on its hinges and clattered against the wall.  In limped one of the black-armoured soldiers, helmet and weapons gone, wide-eyed with fear.  He scanned the room, wild glances dancing from face to face, until he froze facing one of the yak herders.

“Give… me… your… sword…” he rasped, not taking his eyes off the man.

The herder stepped back, but in the blink of an eye the soldier dived forward, pulled the herder’s sword from his belt – and stabbed himself between his ribs, straight through the heart.

The soldier’s eyes glazed over then, the ferocity that had been in them lost.  He sank to his knees, then slumped sideways.

“Thank… the Gods…” he whispered to the silent room, through coughs thick with blood.  Then he breathed no more.