Ladies and Gentlemen of the Internet, I am pleased to announce that SuccessWhale version 2.0 has just been released and is now live on SuccessWhale.com.

SuccessWhale is a web-based client for Twitter and Facebook, written in PHP, JavaScript and MySQL. It offers a multi-column view that allows users to merge together information from all their connected accounts and view it at a glance from any web browser.

You can see a screenshot of it in action below: 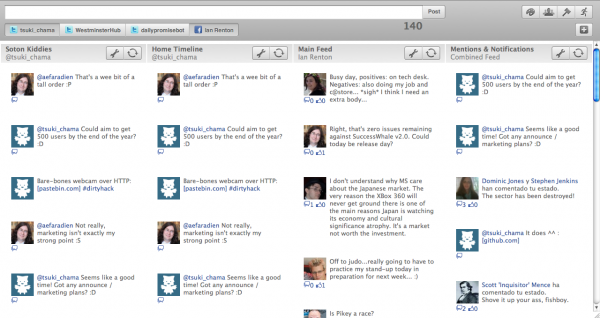 I would particularly like to thank Alex Hutter, Hugo Day, Erica Renton and Rg Enzon, whose help in finding bugs and suggesting new features has been instrumental in bringing SuccessWhale up to version 2.0 today.

SuccessWhale is an open source project, and the source code is licenced under the GPL v3.