My phone, an HTC Desire HD, is a gorgeous slate of metal and glass; thin but with a huge screen, and when I bought it back in December of 2010, it was the most powerful and capable phone on the market. It is part of the future of ‘computing’, capable of 99% of what I use my laptop computer for. It’s also irresistible to my Cut the Rope-completionist child, and unfortunately, heavy gaming use drains the battery in a little under three hours. Normal use, for me, toasts it in between 8 and 12.

Repeatedly frustrated at not being able to use my phone to make calls or navigate at the end of car journeys with my family, I set to thinking about what I actually use my phone for. The majority of my phone use boils down to, roughly in order: 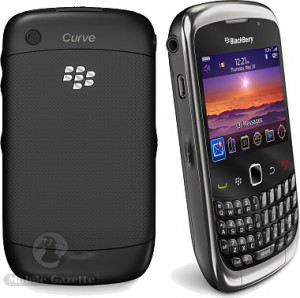 I wondered what would be the phone that minimised cost, maximised battery life, allowed me to do those four things happily, and most of all was completely unattractive to my child. I settled on a BlackBerry Curve 3G (9300). So without further ado, after a week’s worth of use, my thoughts about my new second phone. In case any other Android users are tempted to come to the dark side, this is roughly what to expect:

I’ve always felt that phones with sliding parts were a little less indestructible than I’d like, so this is my first phone with a physical QWERTY keyboard. And boy, is it nice. RIM have a well-deserved reputation here, and after a week of use I’m already typing faster than I could on the Desire HD, even with Swype.

I was coming from a Googly world of push e-mail and Google Talk, but push notifications for Twitter and Facebook are a welcome addition. I’ve no idea how much data or battery power is saved by not having to poll the services for notifications at regular intervals, but the speed at which they arrive is certainly appreciated. 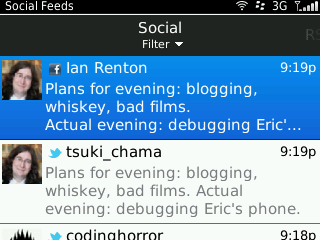 I can actually sit down with this thing in my pocket, which is one thing I’m rarely able to do with the Desire HD’s 4.3-inch screen.

Life with my Desire HD is a constant quest for the nearest power socket. I had it automatically enter flight mode overnight, and charged it at my desk all day. Heavy evening use meant I’d charge it overnight as well, just to be on the safe side, and train journeys caused me to eschew using the phone so that I had a chance of being able to call someone when I arrived.

This thing is well into its second day, its battery well over half full. I may finally be free of phone battery paranoia for the first time since about 2006.

The price of omnipresent push notifications is that your phone, and carrier, must have you set up to use BlackBerry Internet Service. But its roots extend deeper than that, in that some apps – such as Twitter and Facebook – are unusable without it. Coming from a world where apps just make their own connections straight to the appropriate web services, it’s a little strange. And though there are Twitter apps that make their own direct connection, they’re not as nicely tied into the phone as the official one; no other interface that lets you browse Twitter and Facebook together.

App World is no App Store

This hasn’t been a deal-breaker for me as I always intended to install as little as possible on this phone, but my forays into it have disappointed. While the Apple App Store and Android Market seem to have dozens of apps (of varying quality) for every possible task, App World has the opposite problem – if there is an app for that, there’s probably only one, and it’s expensive.

Complaints are often levelled at Android that its menu system is unintuitive (which functions are in the menu, and which are on the app’s main interface?) and that its UI is inconsistent (white-on-black vs black-on-white, orange highlights, green highlights…). Well, it’s got nothing on BlackBerry OS. Text and background colours differ wildly between apps, non-standard widgets abound, and many critical functions hide behind a menu that’s many screen-heights tall. 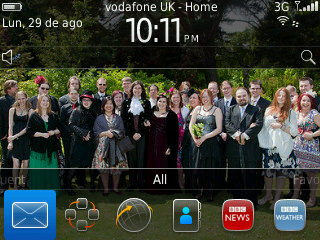 RIM seems to lag far behind the rest of the world in some technologies – for example the Curve 9300, released in late 2010, was the first of the series to feature a 3G radio. It has a 2-megapixel blurrycam and a 624MHz processor. But taking the proverbial biscuit is that 320x240 screen that looks almost retro in with its simple icons and pixellated text. It’s not a noticeable problem after a while, but when going back to using the Desire HD, the Android phone looks positively beautiful.

The phone’s UI language is set to Spanish; in the two screenshots above, only the date is non-English. All in all, maybe 30% of strings are translated. I don’t know if other languages are better, but it’s a pretty poor show compared to other mobile operating systems.

The 90s called, and they want their AT command scripts back.

By the standards of modern iPhones and Android handsets, the BlackBerry Curve 3G is… basically awful. It’s not hard to see why RIM is losing market share to its competitors – their phones just lack any kind of appeal alongside their contemporaries.

But do I regret my purchase? Not a bit. For the four simple tasks that make up 99% of my phone usage, it’s not bad. Its keyboard is a highlight, enough to make me question my love of giant all-screen phones.

And for a smartphone, I’ve found the battery life to be astonishingly good. Over months or possibly years, I think it’ll be worth the money just to be free from the lingering worry over where and when I will next be able to grab a couple of hours in the company of an AC adapter.

So will you be continuing to use it as a secondary phone, or will your Desire HD be relegated to a Joseph-console?

My iPhone 4s battery, for comparisons sake, just lasted Weds evening to Tues morning and was down to ~40%. During that time it was mostly idle and doesn't use any data sources. Still, it's another option... ;)

Not sure. I haven't been carrying the DHD around with me for the last week, to force myself to use the BlackBerry, but I may start carrying it again. Swapping the SIM card is an issue though (since you can't have two SIMs on a single contract with Vodafone) - so far, the effort of swapping SIMs has kept me doing things on the BB that would be easier on the DHD.

Next contract upgrade time, I might look specifically for Android phones with keyboards and good battery life -- but so far, I've never seen an Android phone praised for its battery.

I'm still trying to avoid iPhones on the grounds that my choice of phone shouldn't determine my desktop OS :)