Late last night, my wife thrust into my hands a bottle of something called “Quick Energy”, with instructions that I should drink it in the morning, and a minor warning that it might be absolutely disgusting. Well, as a man who is still trying to track down a way of importing Four Loko, I guess I have no grounds to decline this. 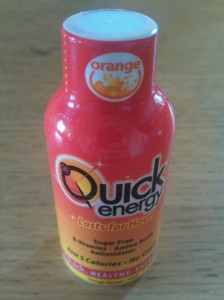 The reverse of the bottle informs me that it contains about as much caffeine as “a cup of premium coffee”, which as the actual value is 175mg, I am taking to mean “a bucket of filter coffee, premium or otherwise”. It also informs me that “phenylketonurics” may be a word, so if nothing else this vile swill has expanded my vocabulary. 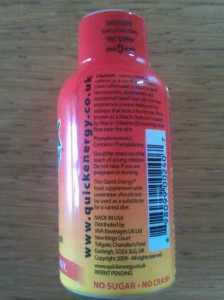 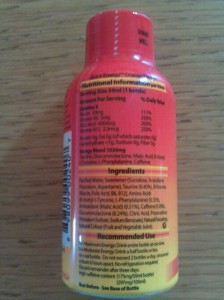 A “niacin flush” is also apparently a thing, which the internet confirms for me. The bottle describes it as “a warm feeling and skin redness”, while some websites describe it as “annoying, sometimes downright painful”, but hey, it’s getting towards the time of day when I’d happily settle for being lobster-red and in pain for the cause of getting some caffeine inside me. On which note it suggests I “limit caffeinated products to avoid… occasional rapid heart rate”, which seems like it’s defeating the point, really.

Taurine is its third most major ingredient, which is a little disconcerting, and though it contains “natural colour” I’m not sure I dare pour this thing into a glass to see what it actually looks like.

Oh, yeah, and it’s eight months out of date. 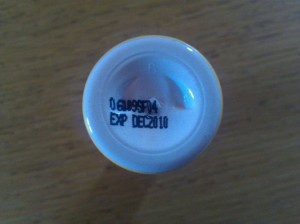 I can’t quite promise a review “by the numbers”, so we’ll go for “by the time” instead:

All things considered, “Quick Energy” was kind of disappointing. I was half expecting to have my brain hot-wired on an insane cocktail of caffeine, taurine and vitamins, but in reality it just does what it implies on the label: provides a pretty normal caffeine-induced energy boost. I can’t really find fault with that, only with my hyped-up expectations.

Verdict: Good for people that don’t like coffee, I guess?

Well, I'm not a fan of coffee. I'd personally probably stick to my monsters for my energy boost, but for the sake of grinding oranges and proplus on my tongue, I may give it a go if it ever ends up being near my when I'm tired... seeing as the places that stock monster seem to hide and change their minds regulally, or it gets bought out in record time whilst the disgusting relentless just sits there on the shelf.

I feel I may have strayed somewhat from my original point....