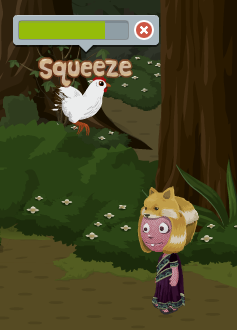 My name is Cheesefish, and against all logic it is one of the more mundane names I have come across. I am wearing a sari and I have a fox on my head. My hobby: squeezing chickens. My mission: to become the finest chef the world of Glitch has ever seen.

Glitch is a browser-based, entirely combat-free, massively multiplayer online game. And for the last few days, it has been something of an obsession. It is Maple Story, if Maple Story cut the combat (and the Korean-ness) and focussed solely on exploration and crafting mechanics. And it’s the exploration that makes it. As a 2D scrolling flash game, there are none of World of Warcraft or Guild Wars’ sweeping vistas here, but it makes up for it in variety. One moment you may be exploring a lush and utterly normal forest, but one stop on the ever-present intercontinental subway drops you off in a land of pastel where the hills have eyes.

Stranger places still await the intrepid explorer. Keita Takahashi, creator of Katamari Damacy, has had his hands on this game and it certainly shows. (The other more recognisable members of the team are, bizarrely, the founders of Flickr.) There have clearly been some… unique minds behind the design of this game, which become most apparent when acquiring raw materials from the environment. 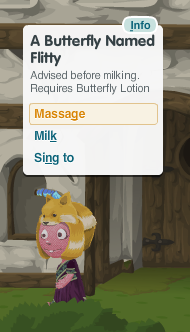 Need meat? You get it by nibbling on pigs, but only after petting them. Milk? From butterflies of course, but they must be massaged first. Grain can be obtained by squeezing chickens, but eggs? Oh, right. Egg plants.

From the odd interactions with fauna to the bizarre contraptions you can use, the ever-humorous quest descriptions and the pet rock that does your learning for you, there’s a strange sense of humour at work here and it works very well indeed.

Glitch is also an example of one of my most hated things - an Energy-based game that has no end. But here, it doesn’t feel malicious like the game-killing ‘games’ of Zynga and Playfish. Energy is plentiful and refills completely every few hours, and even with my character’s mediocre cooking skills, she can easily whip up enough odd food and drinks to keep her energy and mood full. Skills are learned over minutes, hours or days of real time, but again unlike FarmVille and its kin, they’re not just a mechanism to drag you back to the game. There doesn’t feel like an urgency to get them learned, and besides, you can manage them from the website or the iOS app without having to touch the game itself. 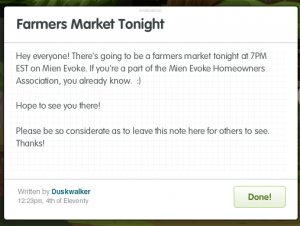 So what the heck is Glitch? It doesn’t seem much like a game, as there’s no way to win and no reason to compete against anyone. It’s a world to explore, to create and add to, and apparently, to hold farmers’ markets in.

It resembles nothing quite so much as a twenty-first century upgrade of the MUSH, the shared environments from the early ’90s. If it allows anything like a MUSH’s ability for players to create and expand the world, it will be a wonder. But creating with text is easy; doing so with graphics much more complex, and I can’t imagine the company behind Glitch giving up creative control so readily.

But even without that, even without an idea of what it is and what it’s going to be, it’s certainly a beautiful something. 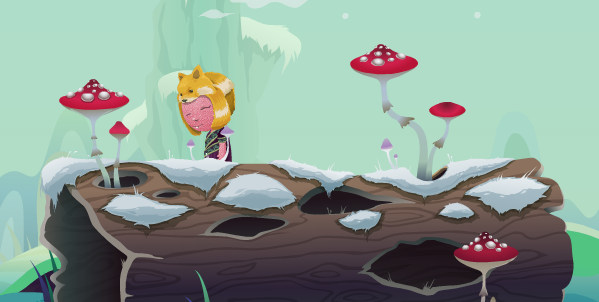 How about interaction with other people. If I signed up, could we embark together upon the greatest, fluffiest, pinkest meringue the world has ever seen or are other people there more as interactive scenery and collections of items to trade with?

In other webgamey news, did you ever play EchoBazaar? (I mean, I know you blocked it on #SW... :P) It plays with the narrative of a RPG in an interesting and slightly confusing way that's certainly worth sinking a few hours over a couple of weeks...

Interaction with others seems casual and optional. I've discovered very few multiplayer quests, and those I've found tend to be extremely simple ("dig a hole with two other people", etc.). The skill tree is also fairly wide and flat, meaning that there's very little "I'm a cook, you're a miner, let's pool our skills to make some high-level item" potential -- after a few weeks of play, a character will have a reasonable level of skill at just about everything. So yes, I'm afraid other characters are largely interactive scenery that occasionally use the auction house.

I intended to play Echo Bazaar right up until the point I blocked it. It didn't seem possible to play without giving it access to my Twitter account, and knowing how annoyed I was by other people's posts, I decided not to inflict the same on others :)

Ah. I'll probably pass then. What keeps frustrating me with EB is the lack of inter-player interaction (and the lack of people I know on there to interact with). It's a hard problem, I'm sure (every year or so Tom and I get excited and swap emails on browser based game design and then give up pre-protoype) but a browser / flash seems like a silly platform to develop a game for unless there's a pro like deep player interaction that you don't get elsewhere.

Hmm. EB uses Twitter / FB instead of having its own login mechanism and offers extra "energy" for tweeting little text snippets about the game setting. But
a) You don't have to tweet those snippets, and you don't lose out on anything if you don't - as it's not a competition, not having as much energy / day simply means you don't explore the world quite as quickly.
b) The snippets are editable. Once I realised it annoyed people, I stuck an @echobazaar on the beginning of each tweet, which should have limited it to people also following the EB account - who hopefully also had an interest in the game. :)

I think browser/flash is probably the most sensible platform to develop games for (possibly second to iOS) at the moment, regardless of whether there's deep player interaction or not. The installed base of Flash is huge, there's hardly any minimum requirements to run and nothing to download. This ease-of-entry, combined with a micropayment rather than subscription business model, has got to be one of the reasons that the likes of FarmVille have 3-4 times the user base of Warcraft. On the programming side, there's no advanced graphics libraries to learn and no hardware support to consider. Unless you're after the depth of game that only a big development team and an installation DVD can give you, Flash looks to me like a reasonable choice.

I didn't realise tweeting from EB was optional, I might play with that at some point then. I have no particular desire to explore at any particular rate, so I'll just avoid tweeting from it altogether.

I really love to play Glitch. It was very interesting and enjoyable. This would be a great for many children who are interested to play online games.