If any of my readers are also SuccessWhale users, you may have noticed that for the last few days, clicking the “Conversation View” button for a tweet (this one:

) has resulted in a message declaring that you have tried to look at a “protected or deleted tweet” even though that is plainly not the case.

First and foremost, you’ll be pleased to know that this bug is now fixed in both the stable and testing versions of the public SuccessWhale server, and in the master branch on GitHub as of today.

So, why did this happen? A one-two punch of Twitter’s meteoric rise in popularity and some PHP developers’ dubious decisions.

Tweets that are replies have a field named in_reply_to_status_id which can be used to query Twitter for the tweet that it was made in reply to. By iterating this process until a tweet does not return an in_reply_to_status_id field, SuccessWhale builds up a “Conversation View” page that allows users to see a chain of posts at once. The code looks like this, and until a few days ago it worked perfectly:

The issue came about due to PHP’s bizarre implementation of weak typing. Twitter is now so huge that it has a very large number of tweets; the value returned by in_reply_to_status_id is an integer identifying a specific one. That number long since passed the maximum that could be stored in a 32-bit integer (232, or 4294967296), and since then the PHP code behind SuccessWhale has been silently converting the number from an integer to a floating point number. This was not immediately a problem, as PHP’s double-precision floats can still uniquely specify integers higher than 232. But as we have now found, it actually is a problem – it only manifests much later, because a floating point number is not always accurate to the nearest integer. Twitter’s post ID numbers are now larger than 253 (9007199254740992), the threshold beyond which a double-precision float can no longer distinguish one whole number from the one next to it.

When SuccessWhale sends that in_reply_to_status_id value back to Twitter, which tweet is it requesting? The right one, or a subtly different one? Actually, neither, because another type conversion issue comes into play. Beyond this 253 threshold, PHP rightly realises that it can’t hope to express the value as an integer – so rather than trying, it represents the number in its exponential form. Rather than requesting tweet number 12345678901234567 – which PHP cannot handle due to the aforementioned issue – it requests tweet number 1.234567890E16. Twitter takes one look at this, gives a “WTF this number has a letter and punctuation in it” and promptly falls over.

Luckily, Twitter pre-empted this issue and provides a in_reply_to_status_id_str field: exactly the same number, but as a string rather than an integer. PHP is perfectly happy to handle very large numbers as strings – and, on line 4 of the example code above, perfectly happy to compare that string to zero. 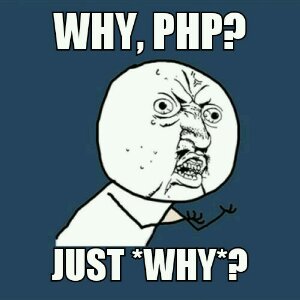 « Previous Post
The Need for Mobile General Computation (aka, why I'm stuck with Android)
Next Post »
Nine Princes and Three Walls