I think I recall reading Roger Zelazny’s book Nine Princes in Amber as a kid, and enjoying it. Now the rest of the series sit atop my metaphorical reading list – not a real pile of books, but a prioritised list of regrets at all the renowned works of fiction that I have not yet read. I am making my way through them, but with the critical eyes of an adult, I am sure that I am not enjoying them as much as I once would have.

The writing style I can handle, just about, as it fluctuates between overly casual and more traditional fantasy fare. But what really grates is the continual demolition of the “fourth wall”; the series never lets the reader get absorbed in its world for more than ten pages before they are reminded abruptly of their own. 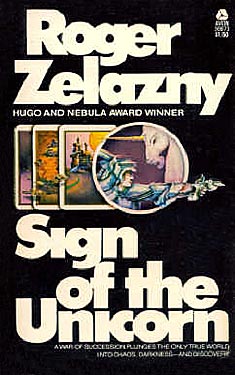 I’ve gotten used to the constant Freud name-dropping – that he was a patient of Freud’s is important to the protagonist, if not especially so for the reader. It’s slightly more bizarre that a character of near-Godlike magical powers compares an obviously magical experience to Hilbert space, or that a mortal from a fantasy world takes to aircraft and modern military tactics without mention of it being weird.

No, what completely threw it for me was a couple of chapters into the third book, Sign of the Unicorn, where the already oddly-named character Random casually drops into conversation the line:

Now I’ll charitably assume that he was making reference to Shakespeare or to Robert Browning, but my first association of that phrase is Stephen King’s The Dark Tower series – the result being that I’m forced to consider that the main characters of the Chronicles of Amber must have read many works of human fantasy fiction.

Even if I charitably assume that the version of Earth that the Princes of Amber visit does not include Roger Zelazny or the Chronicles of Amber itself, they must surely be aware of the genre and its tropes – and now I am aware that the characters I am reading about themselves read books just like the book I am holding–

BOOM. There goes that fourth wall.