With every passing day, my Facebook feed is spending more and more time informing me that old school friends “like Amazon”. (No shit, really?) In the background, it’s fiddling our feeds, showing and hiding entries according to what it thinks is relevancy, and also what it thinks is profit for itself. Game spam is constant. On the other side of the fence, Twitter is trying to force out the third-party clients that made it great, so that it can monetise its users more easily. 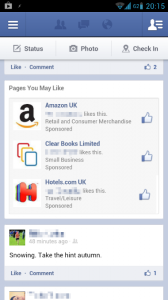 Should we be surprised? Feel betrayed? Not at all. Facebook and Twitter are in it to make money, yet we use them for free. It’s pretty clear that if you aren’t paying for the product, you are the product. We should only expect free-to-use websites to change in favour of their profits, never in favour of us as users.

But I’m growing tired of it. My use of these sites is intensely personal – they are my default, or only, way of contacting many of my friends – but yet this personal process is controlled by a company that is willing and able to affect the process to make money. If it’s more profitable to show me “Bob likes Product X” than to show me Bob’s deep and meaningful status update, you can bet I’ll be shown the “like”.

I miss everyone being equal. I miss services that were honestly free. I miss being close to the infrastructure I use to communicate, rather than having it abstracted. I miss Web 1.0. 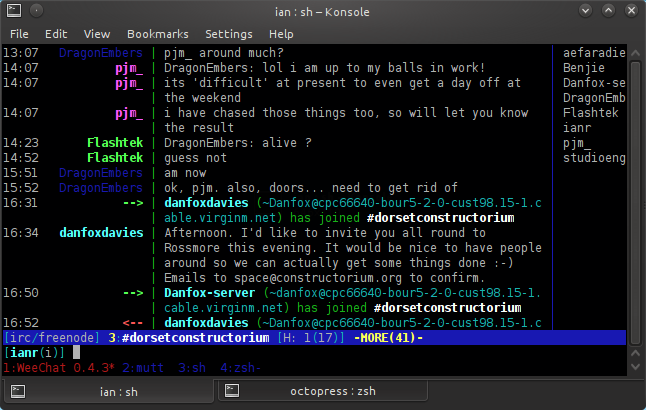 There was a time, not so very long ago, when IRC was our Twitter. It was just as full of funny links and pithy comments, but it was communication between friends, not 140 character witticisms broadcast into the ether in the constant, vain hope of affirmation delivered by the retweets of strangers.

There was a time when blogs were our Facebook, our innermost thoughts put out there for our friends and no-one else; when our friends would think of something to say and say it, rather than simply dishing out an iota of affirmation with the “like” button.

There was a time when mailing lists were our forums, just simple e-mails back and forth without the need for moderators, or advertising, or CAPTCHAs.

There was a time when USENET was our Reddit, a place to while away hours without karma whores and downvotes.

Those times are never coming back. No friends of mine are willing to leave Facebook and talk to each other on a mailing list. The monetising services of Web 2.0 are simply much better, easier to use, nicer to look at, more functional. But they’re lagging behind the tools and services of the old internet in other ways. Honesty – what you put into IRC is what you got out, no server inserted “promoted tweets” into your channel. Thoughtfulness – we had to say things to each other, no likes, no retweets, no upvotes.

At this point it would be appropriate for me to announce some kind of online “back to the land” movement, ending with a rhetorical “who’s with me?”. But rhetorical it would be, because nobody’s with me. I am, at the age of 27, simply old and curmudgeonly before my time; sitting typing in monospaced text to an audience that already sold themselves to play FarmVille.

« Previous Post
The Case for Just Doing Shit
Next Post »
The Ego, the Social Graph, and the Great Unfriending

This quacks like polemic, so rather than climb old Cantankerous and start addressing points individually, I shall say this:

Join rstatus, app.net, Dreamwidth or start an email list and I shall be right behind thee. Diaspora was poo, and I can start emacs idling in #thisone all day again if you'd like, though ... er... I'd rather not. :)

But I rather fear that most of the problem isn't the medium. It's that life leaves (and often requires) less time or effort for writing.

"Polemic" is just the polite way to say "trolling", right? :)

My problem with joining rstatus / app.net or starting a mailing list is that most of the time I'd like to talk to more than one friend -- I think you might be the only one making the jump with me! I idle in #thisone with Alex, but I don't say things on IRC as much as I would like to because unless I discover something that's specific to his interests, I feel like more of my friends would enjoy it if I tweeted instead.

If a good half dozen of us decided that the Soton Kiddies Mailing List was the way forward, I'd set it up in a heartbeat. But you're right, often life leaves us with barely enough time for 140 thumb-typed characters, let alone a meaningful e-mail.

for what it's worth, I never left Livejournal or got involved in facebook or twitter. I was desperately hoping that diaspora was actually going to be usable and really really liked google buzz.

I wish I still had time for IRC, but somehow I doubt that part of my life is going to happen again. On the other hand, a lot of people I know still use it as their primary means of networking, and I do currently have active channels that I could be idling on. So it's not like it's gone away, it's just that everyone seems to have migrated to a shittier service.

You know you want to come back to #thisone!

I think Google+ is probably a worthy successor to Buzz, but it suffers from the same problem as Diaspora -- no "critical mass" of active users to make it worth committing to, and no API that would allow users to use it from multi-social-network clients for minimal effort. Of course, IRC and mailing lists suffer from this problem too as means to communicate between friends.

Out of interest, since you don't use Twitter, Facebook or IRC and don't post on LJ an awful lot, what do you use to keep in touch with friends online? "I do all that in real life you sad bastard" is a perfectly valid response here :)

It's a combination of I do that in real life, and readlng livejournal.
I don't post very often, but I check it about twice a day.
My habits haven't actually changed much since university,

I'm nervous about google plus because of its real name policy. I would have been all over it if they'd come down on the right side of the nym wars.

Personally I think that side of privacy is pretty much over -- unless you deliberately keep a handle entirely separate from everything else you do online, it's not too hard to figure out who you are in real life. OTOH it was certainly a mistake for them to try to mandate real names rather than just nudging in that direction (as Facebook does). They came to the same conclusion too: http://www.washingtonpost.com/business/technology/google-plus-relaxing-real-name-policy/2011/10/20/gIQA81140L_story.html

Related: Anil Dash makes his case for web 1.0-ish rather than the walled gardens of Facebook and co., far more eloquently than I was able to:

I am actually with you! :-) I very much agree with everything you wrote. I wish I had something to add to this comment, but I need to think about your reflections a little longer first. Thank you for writing this!