Long ago, in the early years of Facebook’s rise to power, it became apparent that it had another key feature alongside feeds and wall posts – the friends list. Not only was it a good way to keep in touch with friends after University, it also became a good way of declaring who those friends were. This aspect was emphasized more and more as the site’s user base increased; you could now keep a quite exhaustive catalogue of who you knew. There were even apps on Facebook’s fledgling platform that allowed to to map those friends, and see interesting groups and connections form. 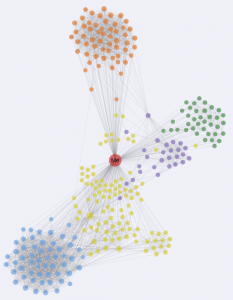 For a shameless nerd such as myself, this is great stuff – I love having a neatly curated index of almost everyone I know, particularly one with which I generate pretty visualisations. This one here shows a nice distinction between people I went to school with (orange), university (blue), people I work with (green), DDRFUKers (purple), and a great interconnected yellow mass of Soton Kiddies, LARPers, neighbours and post-University friends.

But however nice it might be to see this in pictorial form, I know this information. All of it is in my head; each different group and the few people that make the links between them. There’s no need to record this data to help me.

Of course, I need to record this data in order to talk to these people and share status updates on Facebook. But I barely interact with anyone I went to school with. At work, a mention of something I posted on Facebook tends to be embarrassing. Most of the dots marked yellow or purple are people who are on Twitter, and who I would prefer to talk to there.

So for whom am I updating, and publishing, what has become known as my “Social Graph”? I have already established that although I curated my Social Graph out of an egotistic and nerdy desire to catalogue everything, it serves no purpose for me. Presumably, then, I am doing it for the benefit of Facebook and its advertisers who can use it to add cruel hooks into friends’ feeds. “Hey, 24 of your friends play this!” “Ian R likes some guy’s band!”

At best, “unfriending” on Facebook seems like something that is done by spurned teenage girls complaining about how much of a bitch their ex-“BFF” turned out to be. At worst, it seems like an outright denial that you have ever known a person. But what benefit does a user get from declaring themselves “friends” with someone they’ve said not a single word to in ten years?

If, as I have previously bemoaned, I still don’t want to quit Facebook entirely, then I fear a Great Unfriending may be nigh.