There’s a formula common to many of today’s popular “casual” games. If you’ve played a bunch of Facebook games recently, you’ll probably recognise it. It goes a bit like this:

You have a pool called something like “Stamina” or “Action Points”, which refills slowly in real-time. Once you’re out of Stamina, you have to wait for it to refill over minutes or hours. Stamina allows you to complete various actions, quests etc., each of which consume varying amounts of Stamina, and reward you with some combination of money and experience points. Money buys you equipment that lets you do better quests. XP gains you levels, which also let you do better quests. This process continues until…

I’ve played a few of these – the formula is very good at getting you hooked, getting you invested in the game. It feels like you’re losing a lot of work when you discover that it’s just a level treadmill with no real game, and decide to quit. Which is why, naturally, you can pay real money for in-game advancement. By paying the developer, you can avoid the tedious questing and levelling – except that what you’re circumventing is the game itself, so at best what you’re doing is paying real money to fool your friends into thinking that you sink more time into a game than you really do.

I swore off these games a year or so back, as every single example I’d tried was as I’ve described, a game devoid of gameplay. I may have ranted about this at length.

It would be remiss of me, then, to fail to point out that I am playing such a game again, in the form of DJ Rivals (Apple App Store, Android Market). Its difference to others I’ve tried is that it includes elements from other, more game-like things, which add to the experience immensely.

What’s weird is that those other things are Beatmania and Foursquare. 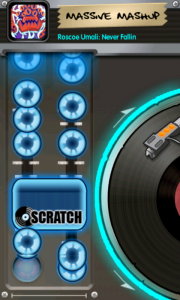 At worst, these “Stamina-based” games are a simple button-click to perform a quest; here there is a basic attempt at turn-based combat, where each attack requires you to play a 10 second clip of rhythm game. Better moves use more complex rhythms, and the hardest moves are on a level that Tap Tap Revenge would consider medium, and IIDX would consider easy. Not especially challenging then, but fun – orders of magnitude more fun than simply clicking a button.

PvP battles are implemented as poorly as in any of these games – they’re identical to PvE battles. But DJ Rivals also introduces a location-based element to play, where players compete to become “House DJ” (Mayor, in Foursquare terms) of real-life locations that are detected by the game’s use of your phone’s GPS. Although fighting over real-world bars and restaurants is fun, a high location-to-player ratio – and the ability to set your location manually – mean that it’s easy to become House DJ of places far from any other players and thus reap the rewards without any risk. 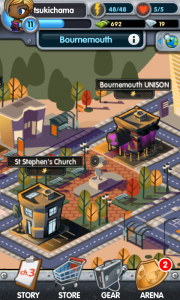 I should point out a couple of negatives, too. Levelling up unlocks more powerful attacks and equipment, but the power curve is not smooth and gradual. It suffers from the same issue as did Terranigma’s last boss – at a certain level it is all but impossible, but one level-up makes it trivially easy. At level 10 in DJ rivals I could do around 600 damage a turn to my enemies’ 800, and I had to return to a previous “Chapter” to find some lower-level enemies to beat. Once I hit level 11, I could immediately buy a move that did around 2000 damage, killing everything – including the next sub-boss – in a single hit.

Also annoying is that it doesn’t tell you that you can only set your character’s name after finishing Chapter 1 – I had to delve into the forums to figure that out.

But on the whole, DJ Rivals is a good and enjoyable game. The “freemium” model that all similar games thrive on is present, but so far I have felt no need to pay real money to speed up my progression, as that progression is itself fun.

I’ve no idea who originally thought that Beatmania and Foursquare was a good combination, but I’m thankful to them for demonstrating that “Stamina-based” games can actually be games and not just money-seeking level treadmills.

I picked this up last night based on the strength of this review, played it for twenty minutes or so and probably won't ever do so again.

"Stamina" as a mechanic is irritating in a manner inversely proportional to how much stress I think my playing the game is putting their server under. As far I could see, that should have been almost none.

Moves requiring the exact same sequence of taps seemed quite dull, though if they look a bit more like that sequence on the right of your post later on, that's fair enough.

The music did inspire me to have another bash at the post-game TWEWY missions though. :)

Yeah, server load is probably fairly low. Stamina as a mechanic exists solely as a hook to get players coming back to the game often, every few hours if they want to level up as quickly as possible. Rather than just playing the game whenever you like, it tries to get players to come back (and thus view ads) much more often.

The later moves are more complex and thus more fun, the only issue is that they're the same regardless of the song you're playing them to (though their tempo changes appropriately). In order to get variety, you have to deliberately choose different moves -- okay when you have three similarly powered ones, but if you have one particularly strong move you'll end up using it all the time.

I'd much rather be playing TWEWY than DJ Rivals, it's true. My copy has disappeared into the ether :S