Nearly six months ago, I sketched out some ideas for a site then called “healthi.ly”, since renamed to Daily Promise. In time I coded it up, made it public, and made the same commitment I have to other sites in the past – 20 active users gets it its own domain and investment of time and effort. Less than that, and it goes how it goes.

It never did make it to 20 users. Its height was around 10, and has since fallen to just two. Today, it falls to one.

I am leaving Daily Promise.

It remains where it is, costing me nothing, ready for use by anyone should they so wish. Its source code is still public, for anyone to grab and build upon.

I’m leaving simply because it doesn’t, after all, help me keep my promises – it merely helps me monitor them. I never found myself striving to beat my record, never felt a pang of guilt as I ticked a row of “no” boxes. I merely carried on as normal, not changing my lifestyle, just monitoring my behaviour as a set of green and red boxes that were at first fun, then over time became a chore. 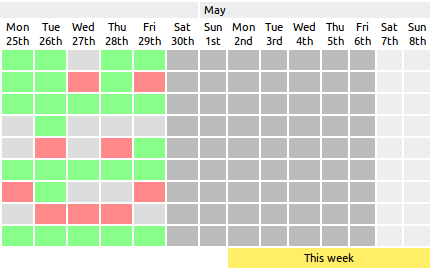 Two apologies are due before I lay it finally to rest:

And of course, thank you to all the users, everyone who offered their comments during the design phase and everyone who submitted bug reports since.

Daily Promise belongs to the world’s ever-increasing body of free software. If you like it, use it. If you don’t like something about it, take it, build on it, and make it yours. I’d love to hear from you.

That was my bad really - should have cancelled the pull request and fixed it myself.

I think that kind of tracking calendar system is most useful if you are already doing some kind of lifehacking / pop-science and want data. It doesn't motivate enough on its own to inspire great sweeping changes. I've had a couple of goes at HealthMonth and the ones that I've been most diligent about have been when I'm trying to build a new habit, or experimenting with a different style of diet.

You're right, it's probably more effective when trying to create new habits rather than just drop old bad ones.

As for what's next, no idea yet! I ought to be putting my time into getting SuccessWhale ready for v2.0 really, but with wedding & holiday planning, free time is not exactly at a premium and I haven't implemented any new core features for weeks.