My body tingles all over, droplets of water slowly shrinking and evaporating into the thick night air. I’ve repeated this process half a dozen times in the last hour, hoping and praying that one of the attempts will cool me down enough that the sweet embrace of sleep will take me. It’s summer in the city, and air conditioning is a luxury we have not been blessed with. 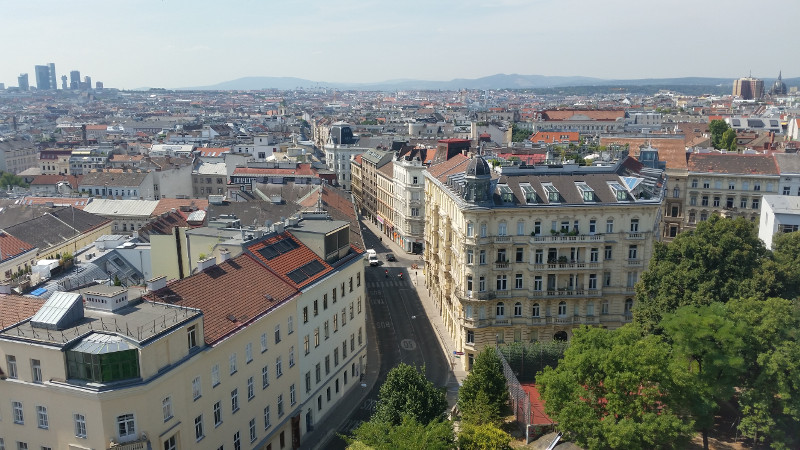 I think of our own little seaside town as having hot summers and cold winters, but that’s just what I’m acclimatised to—moderated by the sea and the long tendrils of the Gulf Stream, our home’s weather is in fact mild all year round. I never pictured Vienna, our home for the next week; snowy winter Vienna as a place that could easily hit 40°C in the summer. But here we are.

I finish the night sleeping on the lacquered wooden floor in the hallway, where an open window keeps it a few degrees cooler than the oven of our bedroom. We may only have paid £50 a night for this place, but it seems a little unreasonable that I spend my night there instead of in a comfortable bed. But again, here we are, in this case with my back uncomfortably stuck to a lacquered floor at 2am.

The second day dawns, and my wake up call comes in through the open window by virtue of construction work. This is not even next door (as you may have seen on terrible daytime TV reality shows that you feel vaguely dirty after watching) but in fact in the hotel building itself, two stories below. The waking process is not pleasant. Breakfast is dubious, but contains caffeine.

Our first full day in Vienna, we skip the hot-sounding zoo in favour of the likely air-conditioned aquarium (sadly not so), track down a highly-rated and air conditioned café for lunch (service levels lacking) and bake ourselves for three solid hours in order to take vaguely shameful selfies in front of the graves of Vienna’s greats. Boltzmann’s really does have S = k log w on it, as our A-level textbooks assured us. 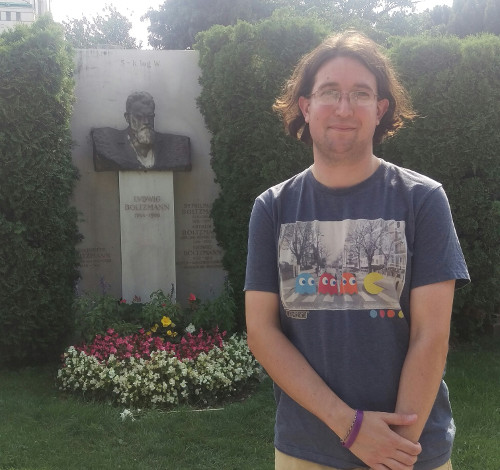 That evening we have the benefit of a second fan to push hot air about the room, bringing a few brief seconds of forced convection to our weary sleep-chasing bodies. After-sun is slowly abating our heat rashes, and we settle in for another night.

Our extra fan reduces our night’s sleep from “impossible” to merely “awful”. I must have woken up half a dozen times, but each time I managed to get back to sleep without trouble. A cold shower, a cup of coffee, and I feel human again.

Despite the ever increasing heat, we attempt the zoo, including (presumably because we hate ourselves) the desert and rainforest exhibits. The rainforest is nice and cool compared to outside—for about two minutes, until the humidity hits and leaves you dripping with sweat.

Lunch is the traditional zoo fare of fried junk and sugary drinks, served somewhere in the middle of a thick cloud of wasps. We emerge relatively unscathed, but shocked by the discovery that Austrians consider Bearnaise sauce to be a thing that you should put actually inside sausages. 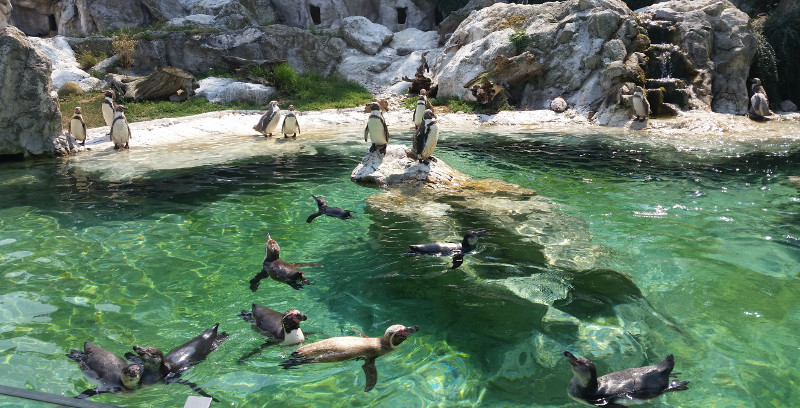 Having seen our first real-life pandas and polar bears, we escape with only one new cuddly toy and an expensive trip through the nearby air-conditioned Lindt store. It was worth the money just to stand in there for fifteen minutes.

Having filled up on Schnitzel for previous dinners and found ourselves too full for pudding, we decide on a different plan for dinner tonight. Our main course is Sachertorte; our dessert is apple strudel. All goes well until the others decide they need savoury food instead, leaving me to mop up the rest of their uneaten puddings. Today has not been an exemplary “being an adult” day.

Somehow I miss the six o’clock start of the masonry drilling, only to be thrust into consciousness at seven by a fire engine blaring its horn down the street outside. The night was better for the adults but worse for the child, and I can tell the short hot nights are starting to take their toll.

We attempt to cool off with a day on the Danube, though without swimming costumes we’re restricted to paddling and boat hire. Two colossal nosebleeds from the small one send us scurrying for shade and calm, inevitably followed by beer and schnitzel. Has the concept of “vegetables” reached Austria yet? I’m not convinced, and I mentally note that my first meal back in Britain should be a giant salad with a chaser of vitamin pills. 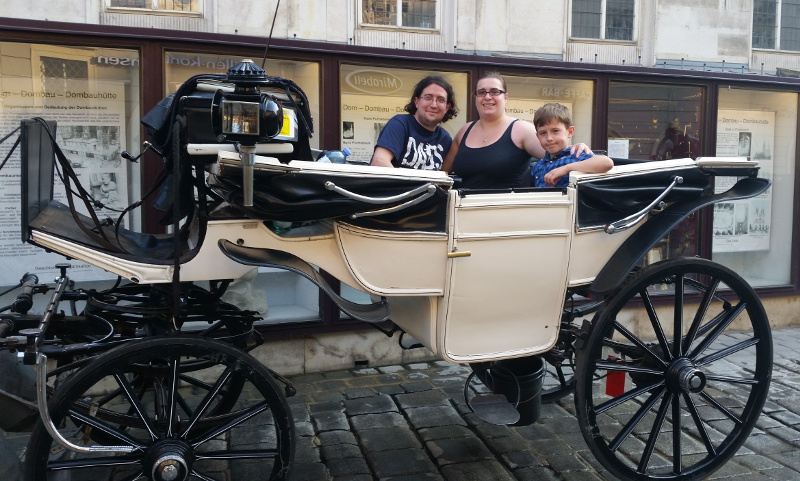 Our final day is a day of calm; of lounging around the hotel room until checkout time; slowly winding our way towards the airport and the plane that would take us home. We are exhausted, and any actual activities would be a write-off. 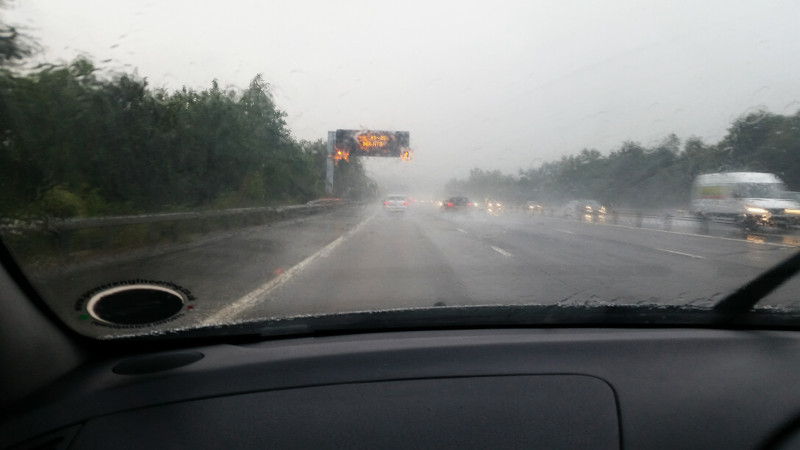 Britain awaits, with its cold rain and slow traffic, our tiny and messy flat, and a pub dinner somewhere in between the steel-grey sky and the soaking earth.

We are home, and comfortable, and back to our normal lives once more. Somehow, it feels like Vienna means nothing to me already. 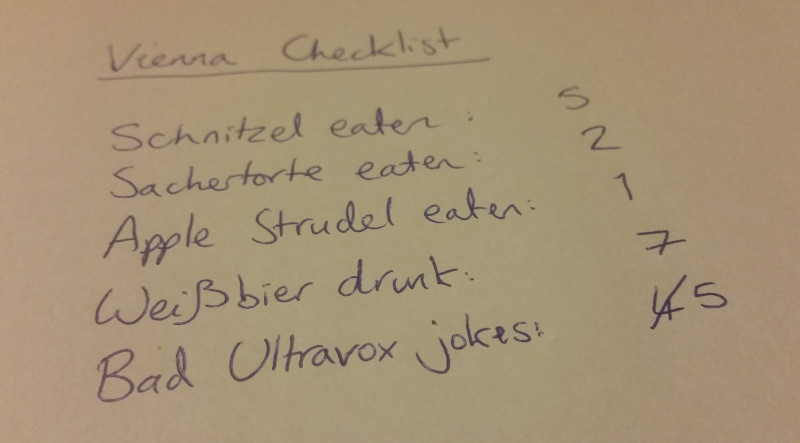 Very nice. A Vienna Review By The Numbers. I bet the British rain never seemed so relieving. We have had it pretty warm here too until that same rain found its way to us.

I'm torn—the rain was a nice relief, but grey skies, cold and drizzle wasn't the ideal welcome back home! I think the worst of the weather here should be over though, and we're in for a nicer week now.