“Facebook has a big problem”, the tech media breathlessly cries. Despite using it every day, I’m not a fan of Facebook, and so am drawn to these articles like a moth to a flame. Let’s all enjoy guilt-free schadenfreude at the expense of a billion-dollar business! So, what’s Facebook’s problem this week? People are sharing more web pages and news stories, but fewer “personal stories”—plain status updates that relate to their lives.

A while back I complained of a slightly different problem: a lack of customisability of the news feed:

Does anyone know if there are secret Facebook settings to customise the news feed? Lately it's been 90% stuff I don't care about: All I really want to see is real status updates!

In essence, I was fed up of every day scrolling past a wall of this: 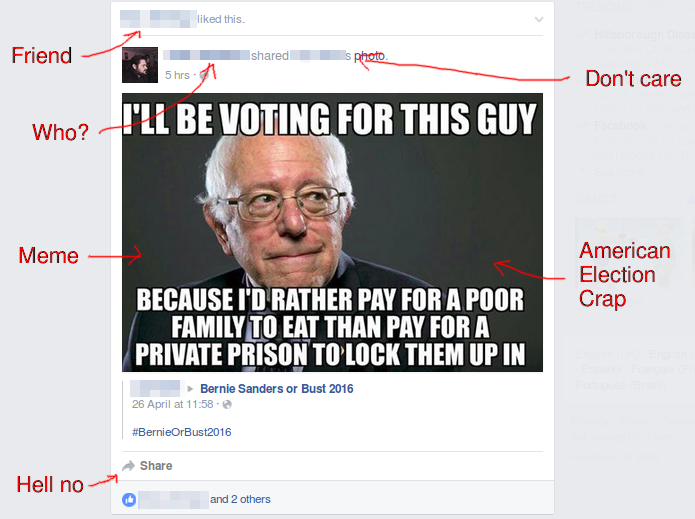 It turns out that Facebook’s controls for the news feed are pretty terrible. If a friend of mine comments on a non-friend’s post, “likes” it, or worst of all “reacts to” it, that’s automatically considered newsworthy for me. Facebook offers no way to customise the feed to remove these kind of posts.

You can, however, choose to hide all posts from certain people, including those not on your friends list. So based on the advice I received, I started “hiding all from” everyone I didn’t recognise who appeared in my news feed.

I’ve done this almost every day for the last couple of weeks, and in a way, it has been very successful. Almost all the strangers’ profile pic changes and distant events have gone, there’s fewer clickbait posts and memes, and mercifully almost no Minions at all. 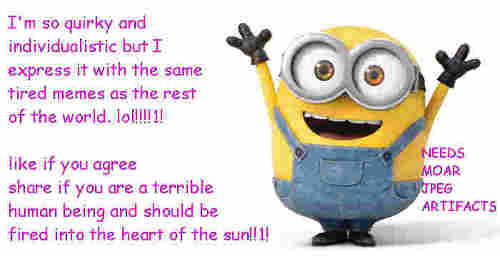 The media was right, at least as it pertains to my Facebook friends. What remains after you’ve removed all the crap is real status updates—from about five people. Out of 200-odd friends, very few are actually posting status updates and pictures. Mostly of their kids, because I’ve reached that age. The rest of my friends either largely share stuff I didn’t care about, so I don’t see them any more, or they post so rarely that they’re drowned out by the wall of baby photos.

Although Facebook was our LiveJournal replacement, the place we went to stay in touch with our friends’ lives once we left university for our far-flung pockets of adulthood, it looks like for us that age of constant sharing may be on the decline.

I’m not sure if I will be happy or sad to see it go.

This is partly marketers fault, stats show that people are more likely to comment, react and share image/video content, so that is all we bloody get, that and the assumption that we want to see things that others have liked even if we don't know them, throw in ads, and there is rarely anything of interest now

I mentally wrote a massive reply to this weeks ago and just realised I totally forgot to actually write it down :S

The biggest problem I have with sharing stuff online is the audience. By trying to be "one tool for everything" Facebook brought a combination of friends, family, old friends and people I vaugely met in the pub once all together in one place. On Livejournal it was just you lot. Now I tend to play it safe and keep the overly personal stuff out of the way. Add the dilemma that new friends tend to also be work colleages and then I've got a whole audience I have no idea how to integrate in. As a consultant the "work colleagues" chop and change constantly, a combination of good friends, client staff, people you sorta met once, people you get on really well with. I actually have very few people from work on social media because of that. It kinda sucks a bit really; I struggle to stay in touch with people I've met in the last 3 years-ish, and I'm not sure what I want to share with them either, which in turn waters down the content that older good friends get.

I'm also guarding older content that I don't nessasarily want work people I barely know to find, preventing me from linking to one account from another. I've gotta be honest, the "use your real name online" generation are going to have hell when they get to our age.

Also my life is pretty boring :)

The other problem is Smartphones. I've gotten so used to the "say it when you think it" aspect of social media I don't make the time later to write stuff up properly. I've been meaning to overhaul my blog for years and figure out exactly what it is. I've mentally written so many blog posts that never actually made it to the keyboard (including this comment, come to think of it). I miss it. Maybe I should get a mini keyboard for the train...

Slightly unrelated: luckily for me the "wall of toddler photos" was coming from ancient people I barely knew from school so bam, that got hidden. Life online has been much improved now I only get baby photos from people I actually care about.

I have the same issue with different groups of people on Facebook—I've ended up going back to more of the "old Livejournal view" by normally looking at a custom list of just you lot, and normally posting things that are only visible to that group as well. A lot of the people I know from work don't use Facebook anyway, or use it pretty sparingly, so I don't think I'm missing much!

FWIW I do have a mini keyboard that I briefly used on the train, but I gave up on it pretty quick. I prefer to use my tablet for portable writing stuff, but even then it sits behind the sofa and rarely leaves the house.

The more the establishment fails, the more its acts of desperation. You can’t fix this the same way as one would fix elections. You can’t pull the wool over people’s eyes. This isn’t 1939 Germany and this isn’t a case of silence one you silence the many. It’s too late.