Last time on the Raspberry Tank build diary, we figured out exactly what signals we would need to use to control the tank if we were to replace the TK-YL101-3 RF receiver board with the Raspberry Pi. This time around, we’re going to see if the Pi can actually generate that signal.

The Raspberry Pi comes with a 26-pin header that exposes GPIO pins, UART, SPI and I2C interfaces and 5/3.3V power, and it’s this that we’re going to use to generate the control signal for the tank. Specifically, one of the GPIO pins, as these can easily be switched on and off from software.

The eLinux Wiki provides an excellent summary of the pins on the Pi’s exposed header. Based on the diagram there, I chose to use GPIO 7 as the digital output that we will later wire into the tank – mostly because in position 26 on the header, it is easy to get to.

Unfortunately the Ground pin is not so easily accessible – the pitch spacing of the pins is not large, and in the course of testing I accidentally touched both Ground and the neighbouring UART Tx pin together with a crocodile clip. This caused an immediate restart of the Raspberry Pi. I was probably lucky to have hit those two, as doubtless there are some combinations that can cause permanent damage to the device.

Testing continued after the tactical deployment of sticky tape: 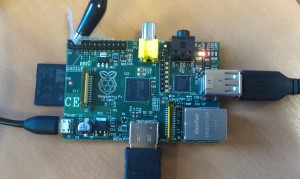 With this in place, the oscilloscope could now be connected to pins 26 (GPIO 7) and 6 (Ground) of the Raspberry Pi’s header, allowing us to see just what the device would be outputting.

Firstly, I wanted to make sure that a C program could toggle the GPIO bits fast enough to replicate the signal that the TK-YL101-3 board sends. Yesterday, we discovered that the shortest marks and spaces in the message were around 300 microseconds long, so my first program simply generated a square wave with a 600 microsecond period on GPIO 7. I based it on Gert & Dom’s example on the eLinux wiki. (I have not included source code for this program here – source is available below for my more advanced program that sends the correct command codes.)

The result of running this program was a pretty neat 3.3V, 600 microsecond square wave. 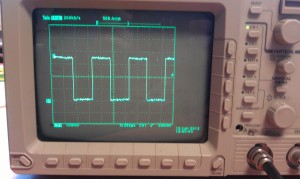 So, we can toggle the GPIO output line fast enough to do the job. But could we output the correct bit patterns to control the tank?

The next stage was to expand the program to transmit the control codes that the tank is expecting. Nothing too clever at the moment – the program simply sends the “idle” command for a while, followed by “ignition”, then sends “slow forwards” until manually halted.

This program was a complete success, reproducing almost exactly what the TK-YL101-3 chip produced, but with a couple of potential issues: 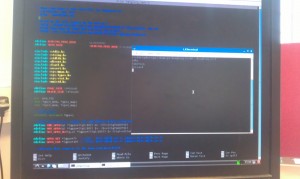 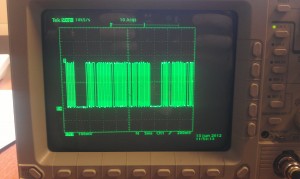 You can find the source code for my program on GitHub. To download, build and run it on your Raspberry Pi (assuming you’re using the standard Debian image), you can run the commands below – though bear in mind that they will download the latest version of the test program, which may differ from the one linked above.

Warning:The first command below makes subsequent commands run as the root user. You must be root to use the Raspberry Pi’s GPIO. However, bear in mind that downloading unknown code from the internet, compiling it and running it as root is about the most dangerous thing you can do with your computer! Before running this or any other code you download, you should really read the source – that way you can check that it’s not malicious, and also figure out how it works!

If you see “Idle”, followed by “Ignition” and “Forward” on the screen, it’s working!

I absolutely love your project. It's the coolest use I've yet seen for a Raspberry Pi.

I've got to admit though that that I had noticed you hadn't posted any warning note next to a code snipped which basically goes:

1) Deactivate your security
2) Order your computer to download and compile a set of unvetted code from the internet.
4) Run it as root.

I think npm has a really important 1 line warning next to its simillar script: http://npmjs.org/

I'm only a little nervous about it because the raspberry pi is supposed to be a kids platform, and I think it would be really cool if the community made an effort to make sure all the awesome project documentation teaches young coders good habits.

That's entirely fair! I've added what I think is a suitable warning -- what do you think?

Have you considered doing the bit timing in kernel space? An example could be seen here:
http://www.raspberrypi.org/phpBB3/viewtopic.php?f=37&t=11159

I did wonder if I'd have to, but I tried to avoid it as I'd never done any kernel module development before. As it turned out, usleep() in C is good enough to produce the timing I need -- in fact, the timing is more reliable using this method than it was using the original RF receiver board!

Thanks for the link though, I'll keep it in mind if I need to do any higher frequency control.