Our first game session began our intrepid adventurers, Nydinya the Druid and Davos the Ranger, receiving a quest from Volodar Yeskas, the chief councilman of Taurë Peler. A scout, recently sent to the east along the southern side of the mountains, had sent back a message saying that he had seen some heavily armoured creatures making their way west, potentially toward the town. The scout sent no subsequent messages, so these two young elves were to be charged with a quest—find those creatures and by guile, diplomacy or combat, ensure they do not find Taurë Peler.

After a brief skirmish with some wolves on the eastward path, one was tamed by use of the druid’s magic while the other was killed, setting the scene for a session of largely unexpected and lengthy cooking and crafting activities.

Later, a camp site was found, which looked to have been used some days before. Our adventurers followed a trail of boot marks but eventually lost the track. Not long after, they were discovered by a pair of Orcs, evidently some kind of patrol. They were defeated in a brief skirmish, where Davos was gravely wounded but quickly recovered through use of Nydinya’s magic.

Thereafter the adventurers headed south-east, the way from which the Orcs had come, away from the mountains and following the river down towards the foothills and the plains. The session ended on their second night of their quest, where as they made camp, they spotted smoke coming from the mountains to the north… 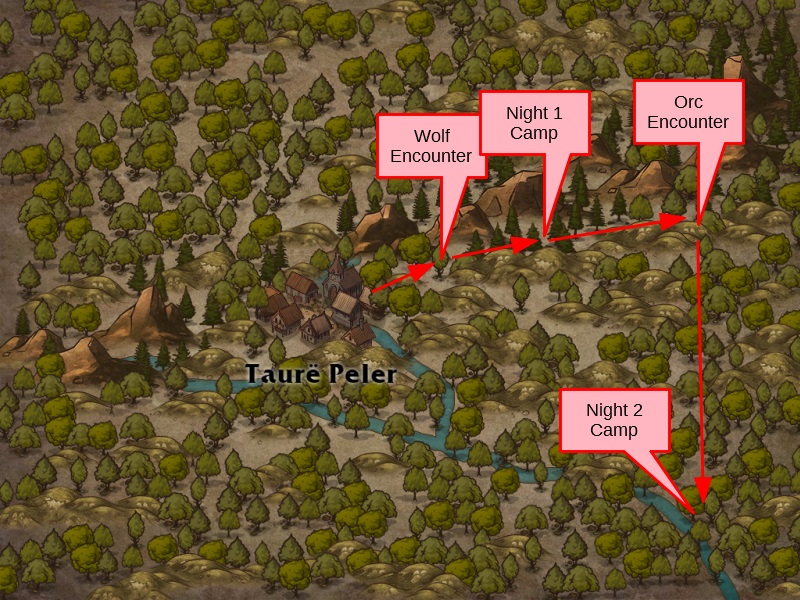