It’s no secret that, since the launch of version 2.0 back in July of 2011, my SuccessWhale social network client has stagnated somewhat. It had reached that point at which it did everything that I needed it to do, and so my enthusiasm for updating it kind of disappeared. 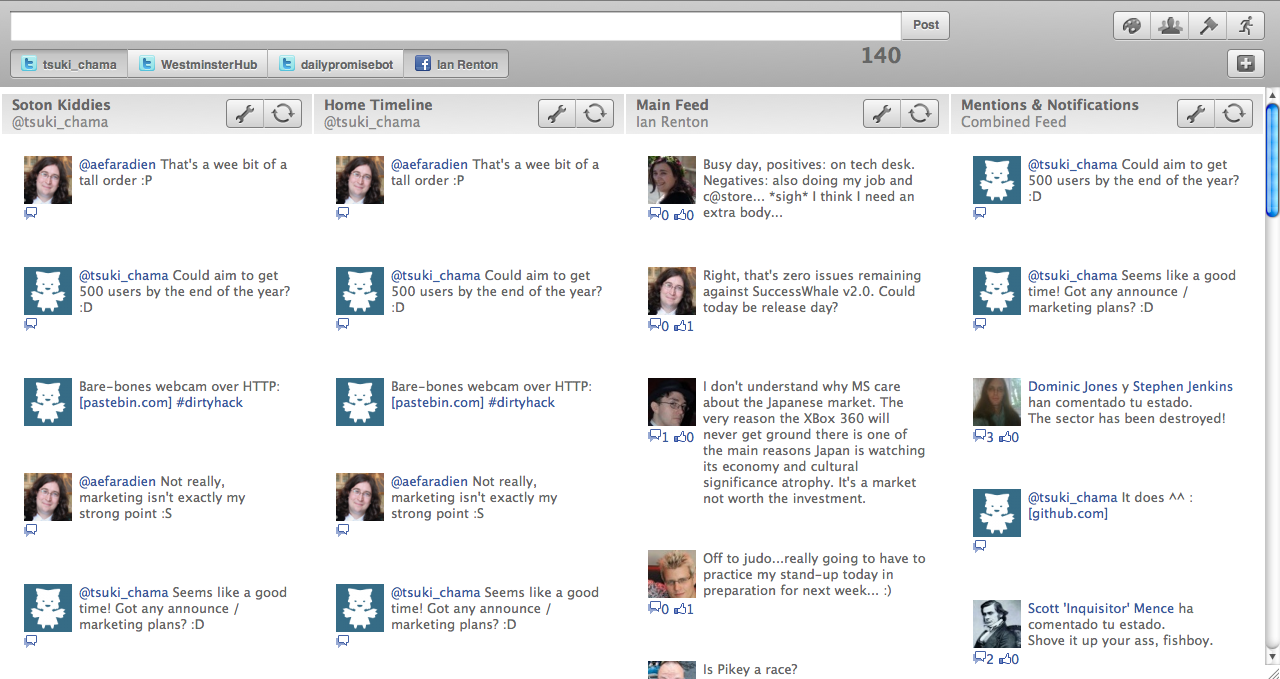 And that’s where SuccessWhale comes in.

SuccessWhale began as a “my first PHP application” kind of affair, and right now it still is. The code behind it is an ugly mash of model, view and controller without a decent structure. SuccessWhale version 3 will be rebuilt from the ground up with proper design principles behind it.

It begins with a proper API, which I’m coding up right now using the Sinatra framework in Ruby. Once complete, the web-based front end will be rewritten too, as a strict user of the API using client-side templating in JavaScript. It will be a responsive design, displaying the user’s preferred number of feed columns in landscape mode and reverting to a single swipe-able column in portrait mode for mobile phones.

Even better, haku is making an Android client called OnoSendai which will feature the combined feed columns that are SuccessWhale’s major feature. We will bring TweetDeck’s feature set back to Android with a lot more besides, offering the users the ability to mix together the feeds in their social network client like never before.

And to prevent our software going the way of TweetDeck – being bought up and eventually scrapped – SuccessWhale and OnoSendai are open source software. A version of SuccessWhale’s API, operating on the main database at successwhale.com, will be open for anyone to use and build clients for. SuccessWhale is released under the BSD 2-clause licence and OnoSendai under the Apache 2.0 licence, meaning that even if we were to be bought out, anyone on the web could simply grab our source code and run their own SuccessWhale.

We’re bringing TweetDeck’s features back to Android and to the web. We’re making SuccessWhale an application to be proud of. We’re free, we’re open, and we’re Twitter-proof.