In one of my previous blog posts, “Designing for Granddad”, I examined some of the user interface features that cause my grandfather issues when using his computer, and left a few hanging questions as to how we software designers can make our apps less confusing to the novice computer user.

As is my unfortunate habit, I spent some of today checking out how work had progressed on the GNOME-shell and Ubuntu Unity desktop environments.  (I enjoyed the eye candy for around three hours before reverting to the UI of least resistance.)  Various complexities in their interfaces irritate me and seem to have provoked the wrath of a community of largely experienced computer users.  This got me thinking about how I would go back the other way, and design a desktop environment for absolute novice computer users – one without many of the frustrations of modern software. 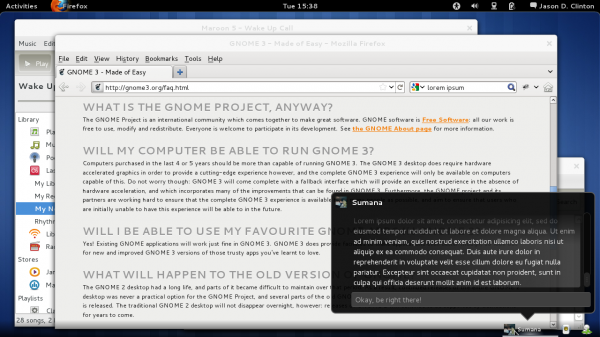 My ideas, roughly distilled into a sort of ‘design manifesto’, are:

I’ve mocked up a couple of interfaces to show a desktop environment that adheres to these principles.  The first shows the “desktop”, taskbar and an example notification: 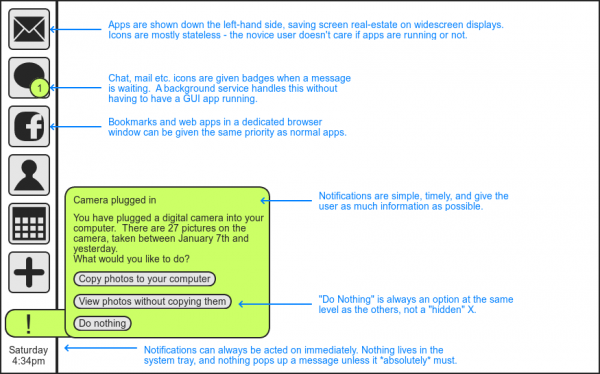 The second shows the mail app with example messages: 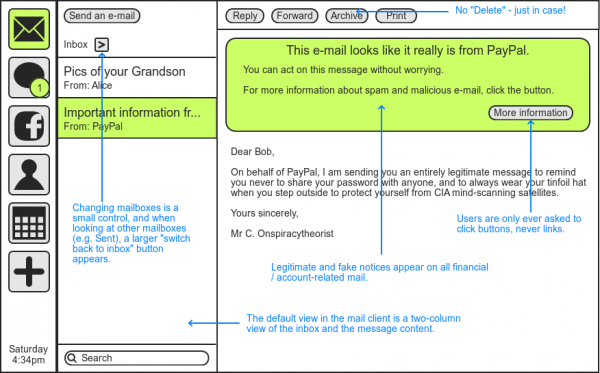 Is there anything you particularly like or hate about the mockups or the design principles behind them?  Bear in mind that if you consider yourself tech-savvy or a software designer yourself, you’re probably not the target audience for this desktop environment – pretend to be your mother or grandfather for a minute and see how you feel about the suggestions I’ve made.

I’m happy to go further with these designs if you think it’s useful, and of course your own ideas and suggestions are more than welcome.  The comments section is yours!

For anyone wondering, the mockups in this post were generated with Mockingbird, an excellent UI mocking web-app.

I guarantee people won't get what all those icons mean. That's the biggest problem I have with my mum using her computer, she just doesn't understand what the icons are trying to suggest.

What is the + sign? What is the blob with the (1)? etc etc. I can guess, and I'm not afraid to experiment by clicking on things, but for the majority of users not familiar with icons (and I'd warrant even some who are) they wouldn't understand and would be paralysed by fear of clicking on the wrong thing.

I agree with a lot of your points, but the actual implementation is supremely difficult.

You're right, I kind of go against the 'manifesto' bit by not providing text for the main taskbar. Maybe something like this?